The “Mystery of Musk” project seems to have created a lot of interest in natural, plant-based materials that can produce a musky scent. Of course, animal-based products like civet and castoreum are natural, too, but there are some convincing and not so convincing reasons for not using them. I won’t go there today.

A few weeks back I wrote a post on amber, but didn’t include ambrette seeds in that category. Perhaps I should have because the name sounds a bit like amber, and it sometimes seems to be described in terms of amber or included as a component of an “amber” accord. The source of ambrette, also known as “botanical musk”, “vegetable musk” and other, less obvious names, comes from a plant in the hibiscus family, Abelmoschus moschatus, shown in the drawing at the top. It’s related to okra (Abelmoschus esculentus), a vegetable that I love curried, fried in batter, cooked in gumbo, or just about any other way you want to prepare it. I used to grow it back when I lived in a place where we didn’t have slugs as big as small dogs, slimy disgusting creatures that can completely mow down a row of okra plants overnight. Come to think of it, okra has a slimy side to it, so maybe there’s something in it that slugs find especially delightful. I now snap up okra whenever it appears in one of our local produce stands, which is all too seldom. 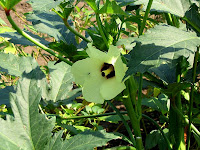 Fresh okra flowers are beautiful, like a light yellow hibiscus with a dark red center, and the fresh pods and seeds have a light perfumey smell. Abelmoschus moschatus flowers and pods look very similar. Ambrette amps up the okra scent to produce a highly distinctive aroma that makes a wonderful perfume base. 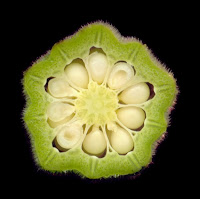 A while back I bought a bottle of ambrette seed CO2 extract and have been learning to love it. It arrived in the winter, as a beige-colored solid that looked like just about any other absolute. In that state it didn’t seem to have very much aroma, just a sort of off-putting waxy smell a little like fake oakmoss. To give it a fair chance, I warmed it up enough so that it became liquid, and rubbed a little bit on my skin. At first there was just the waxy smell, only stronger, but before long it bloomed with one of the most amazing and unique scents that I’ve experienced. Unless you’ve smelled ambrette, it’s hard to describe because I can’t think of anything else like it. It’s a little bit floral, a little bit sweet, and a lot of its own musky character. It has decent sillage and lasts for a very long time once it reaches the “musky” phase of its development. I like to wear it by itself, but I’m not sure that hard-core approach is for everybody. Now that it’s summer, it stays mostly liquid, with some waxy stuff in the bottom.

I was planning on using ambrette in a perfume when I acquired some samples of Strange Invisible Perfumes. The first one that I tried, Musc Botanique, was almost pure ambrette with the waxy notes at the beginning covered up with some geranium. I love it. The next was Prima Ballerina, mostly a mixture of ambrette, rose, and lime. Also very nice. The third one, L’Invisible, seemed weak compared to the others, but there is a slight ambrette note in the drydown along with some oakmoss. I still have two more SIP samples to try, so am curious to see if they have ambrette in the base, too. If so, I’ll have to conclude that the trademark of SIP is ambrette. Not a bad thing to use, but it would be nice to mix things up a little. Once I try all of the samples, I’ll probably post reviews here. In the meantime, I’ve concluded that ambrette is a good scent for hot summer weather, and will go to the produce stand to look for some okra. A big pot of gumbo sounds like a good meal for the coming weekend and an opportunity to think about the musky side of okra.

[All Abelmoschus illustrations are from Wikimedia]
Posted by Doc Elly at 1:04 PM