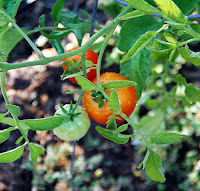 In considering raw materials, I have no plan for how I go about choosing topics. So far I’ve written about newer materials that I’m in the process of evaluating, so here’s another one in the same category. The last one was palo santo, and this one is also a green note, so I guess I could start with a series of “green” materials.

Anyone who has encountered a real live tomato plant probably knows what tomato leaves smell like. It’s a unique scent that epitomizes summer. Apparently it’s a love-it-or-hate-it scent, but for those of us who love it, wouldn’t it be nice to capture it as a perfume note? That was my hope when I got a batch of Robertet’s tomato leaf absolute, but it was only partially realized. The absolute is a viscous yellow-green liquid that smells more like generic green leaves than tomato. It’s not too sticky, so is relatively easy to work with. It's definitely green, somewhat grassy and leafy, with only a remote hint of tomato. In reality, it’s more like a milder version of violet leaf absolute than tomato.

I suppose it’s not surprising that the scent of fresh tomato leaves is hard to capture in a natural, extracted product. The scent actually comes from bulbous structures on the tips of the hair-like structures (trichomes) that cover the leaves and stems, and is secreted as an insect repellant. This secretion is what we smell when we gently rub a tomato leaf to release the fragrance.

When tomato leaves are harvested, I imagine there’s no way to separate the trichome secretion from the leaves and stems, so everything gets extracted together and the green, leafy components end up predominating. There’s nothing wrong with that, but if you’re expecting a strong and authentic freshly-rubbed tomato leaf smell, you won’t get it. 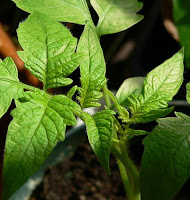 What you do get is a very strong, dark green, pungent scent at first that gradually becomes lighter and more herbal, with a hint of something almost perfumey. It’s lovely and fresh, but not all that tomato-y. I don’t detect any “off”-notes that would need to be masked, so it’s versatile and could participate in any aspect of a fragrance. It’s not even bad as a solo act. Longevity is not great, two days on paper and a few hours on skin. It would function as a top- to early middle note in a blend.

I think tomato leaf absolute could be a good starting point for reconstructing a true-to-life tomato scent, but it would take a lot of tinkering to get it right. As is, it could be used in any composition that needs a light green note, but it would not be explicitly recognizable as "tomato leaf".

[Tomato leaf trichome image from UC Davis website; other images from Wikimedia]
Posted by Ellen at 8:51 AM 9 comments:

The camellias, hellebores, crocuses, and daffodils have finished blooming and now it’s the turn of the tulips, hyacinths, and roses. Days are noticeably longer, we went through the silly government-mandated change from Pacific to Mountain time, the sky was pure blue yesterday and today, the sun as been shining, and the birds and frogs are singing. 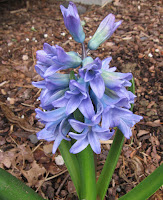 In step with nature, winter quarter at the university finished, my grades are turned in, and I have a small break before spring quarter starts. After three trips during winter quarter, I’ve somewhat finished catching up on things that had been neglected, and am catching my breath before going on another day-job related trip, this time to DC, leaving very early Sunday morning. So much for my break.

I wanted to post something (anything!) here before my next trip to let everyone know that I’m still alive and potentially writing, and that I will be back to regular blogging soon. I will also deal with any draws that are pending.

In the meantime, I’ve just removed all of the spam comments L that accumulated while I wasn’t looking. It seems like one spam comment attracts a whole herd of others that pounce of the blog like a pack of hyenas. Curses on spammers, especially those whose comments make so little sense that they obviously didn’t even look at the post before pasting their irrelevant sentence with a link into the box!

I’ll be back soon with some actual content, and wish everyone a happy spring.

FROM SAN DIEGO TO SAN FRANCISCO 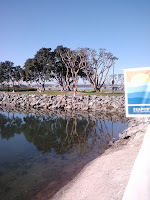 Normally yesterday would have been Mass-Market Monday, but I’ve been recovering from the post-effects of a trip to San Diego to a scientific conference (my other life), and the pre-effects of preparing for the Taste TV Artisan Fragrance Salon in San Francisco (this life). Without Stacey to assist me, I’m not sure how I could have managed such a fast turnaround. 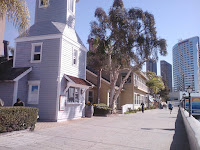 The backlog of shipping is more or less caught up for now, and yesterday the big boxes of items for the trunk show at Tigerlily on Friday and the Salon on Saturday were dropped off at FedEx. What a lot of stress it is to get things ready in advance to allow for shipping time, and what a relief it always is when those boxes are on their way! I’ve gotten much more efficient at preparing for shows, having generated a comprehensive checklist and stored infrastructure items in places that are reasonably accessible and easy to remember. However, there’s always a different set of stock to bring to shows, and this is now the biggest challenge to prepare. 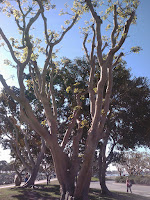 Looking back on San Diego, it doesn’t have the strong jasmine scent that I associate with San Francisco and LA. Maybe it wasn’t the right season, but I don’t think I saw jasmine growing there. The few flowers that were growing were not fragrant. What I did smell in San Diego was mass-market perfume everywhere on the streets. It was of two distinct types, which, as you might have guessed, were the women’s and men’s versions.

All of the women’s perfumes were saturated with the “scratchy green tea” note that I dislike so much. It would have been hard to pin it down to specific fragrances, or even brands, because that note is so ubiquitous in mass-market perfumes and produces so much sillage that everything else is left behind on, or very close to, the wearer. 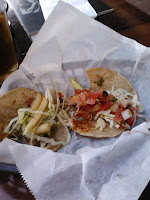 The men’s perfumes were all heavy on the sharp “woody-amber” notes, which I don’t mind as long as they are not mixed with aquatics. Thankfully, San Diego men did not seem to go for aquatics. Every perfume that I smelled on the street belonged to one of these two classes. I don’t know if that’s the case elsewhere (it's not on the UW campus), but it certainly was in San Diego.

My other interesting discovery was "Mexican" food made with French fries. My first introduction to this genre was a “cheeseburger taco”, which was a bit of meat with cheese, fresh salsa, and … you guessed it … French fries, all rolled up in a soft taco. It’s not as bad as it sounds! In fact, it was pretty good. Later, at another venue I saw people eating carnitas (barbecued meat) topped with French fries, cheese, and salsa. 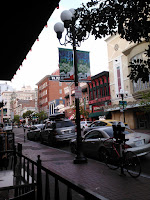 My biggest achievement while in San Diego was eating two fish tacos. This probably doesn’t sound like much of an achievement, but years ago I suffered a bad case of food poisoning after eating a fish taco at a chain Mexican restaurant in Irvine, California. That experience resulted in an intense conditioned taste aversion to fish tacos that only now is reaching the point where I can think about putting a fish taco anywhere near my mouth. I have to say that the fish tacos I ate on two separate occasions, from two different establishments, were excellent, and I suffered no ill effects. It felt good to know that I can finally enjoy this specialty again!

On Friday I leave for San Francisco, so there will probably be some more down time on the blog.

[All photos are mine, taken with my trusty phone and un-Photoshopped]