The winner of the snowstorm drawing is MIM. 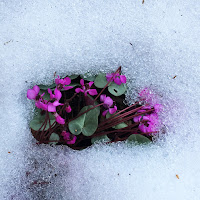 Because the last prize was not claimed, you will win double the samples (200 g) plus some extra bonuses that depend on your shipping address. Please contact me with your full name and shipping address. You can e-mail olympicorchids at gmail dot com or leave a message on the Olympic Orchids Facebook page.

After two weeks the snow is finally melting, and there are now patches of bare ground. They look so pretty after the solid white! I’m continually seeing new surprises from under the snow. Who would have thought that cyclamen flowers could stand having the weight of two feet of snow on top of them, let alone the cold temperatures? Yesterday, for the first time, I saw the cyclamen flowers that had been blooming before the snow started, slowly uncovered, apparently with no ill effects. Similarly, the crocuses, daffodils, and tulips that have been uncovered seem not to have minded the snow too much. The hellebores, which were in full bloom, got beaten down a little, but the bent stems make nice cut flowers for inside the house. 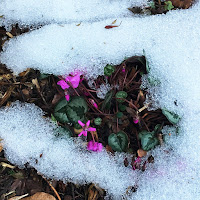 A week before the show we planted a sarcococca bush, seduced by the strong fragrance of the little flowers. It was completely buried in snow, with not a leaf showing, and I was worried about it. However, now that its covering has melted away, it looks perfectly healthy. The jasmine we planted last year didn't fare so well. It was completely covered, too, and now the leaves look brown. However, the leaves near the base are still green, so maybe there’s hope. Spring will reveal what’s left of it, if anything.

We’ll have a new drawing for 100 g of samples, so leave a comment saying what surprises you have found when snow melted, or when other natural events changed the landscape. The winner of the new drawing will be announced in about a week.

[Photos are mine from this week]

DRAWING FOR A SNOWSTORM 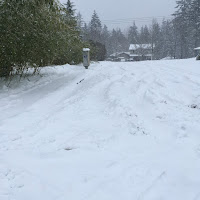 Today, after a short break, the snow continues coming down hard. New snow falls on top of old in a cycle that has reached the point of absurdity. As the snow event has progressed, I’ve found myself going through stages of relating to it. When the first snow came, I was happy and excited like a little kid because we don’t get to experience much snow, so it’s a novelty. I love to watch it falling even when it doesn’t stick (usually), and it’s even more exciting when it does stick and everything slowly turns white. What I didn’t like was the cold temperature, but I went out and ran a little in it twice anyway. The next snow was bigger, and by then I was kind of blasé about it, to say nothing of being concerned about the state of my orchid greenhouse, which, by the way, is still in lockdown mode. 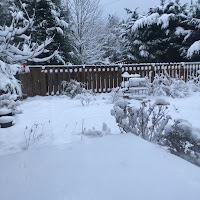 The third snow came yesterday, and by then it was mostly just annoying, although there was a little of the morbid curiosity that one feels looking at an accident or a natural disaster (How much more can it snow?). I think the third snowfall raised the total depth to about 14-16 inches (25-30 cm). Today’s snow will pile on top of that. By now I’ve become fatalistic about it and given up on even going outside, let alone going anywhere. Given that we stocked up on groceries last Saturday and our power hasn’t gone off, I can just sit and laugh at it.

The bright side is that I am getting a lot of perfume-making done, putting together a big wholesale order. Who knows when it can be shipped, but at least it will be ready.

[Both photos are mine. The top one shows the condition of our street, which has just been getting worse for at least a week. ]
Posted by Ellen at 4:07 PM 30 comments:

WINNER OF THE NO EXCUSES NO RESOLUTIONS DRAWING 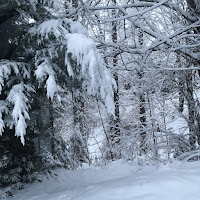 The snowstorms continue to roll in one after the other. After a break yesterday it is again snowing like mad tonight and accumulating on top of the old snow. At least it keeps things looking pretty.

The most important thing is to announce the winner of the first drawing of 2019.

To claim your big bag of samples, just send an e-mail to olympicorchids at gmail dot com or leave a message on the Olympic Orchids Facebook page. I am more likely to see an e-mail because things sometimes disappear from Facebook, or are hidden.

Tomorrow I will be just as snowed in as I am tonight, so will start another drawing. Watch for it!

[Photo is mine, just a few days ago, showing the path down into our ravine after the first snow]
Posted by Ellen at 6:41 PM No comments:

Weather disruptions and an orchid-growing business for sale 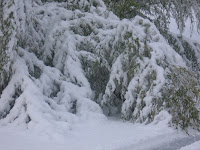 As last week’s polar vortex subsided east of the Rockies, the weather was predicted to warm up significantly for a few days, which it did. For most people this wouldn’t really affect their lives, but as an orchid grower who has to ship plants, it was a big deal. It meant that dozens of plant orders that had been sitting around on hold for weeks suddenly had the green light to travel. My assistant and I spent all of Friday and Saturday packing plants nonstop, assembly-line style, and my poor husband Michael had to transport them all to the post office on Saturday, where the avalanche of “live orchid plants” packages was quite the center of attention. There was another batch to pack and go out on Monday, but how quickly things can change! 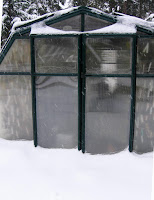 Sunday afternoon it started to snow here, and it continued to snow through noon yesterday. Sunday night the temperature dropped into the 20s F and last night into the teens F! (It should be teens C this time of year). It has not been above freezing since the snow started. Fortunately I had seen the weather forecast, which as a grower I check obsessively, usually with regard to shipping, but our own forecast looked alarming. On Saturday afternoon I watered the greenhouse, turned the water off and allowed it to drain, turned the heat in the greenhouse all the way up, sealed every opening with bubble wrap, closed the door, and crossed my fingers. The greenhouse has been in lockdown mode since Saturday, and will continue to be until the weather warms up. Luckily there has not been a power outage here, although many people did experience one. 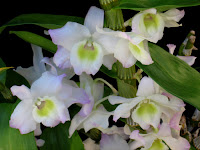 Yesterday and today classes at the university have been cancelled. I haven’t been able to go anywhere except on foot, and I have gotten an amazing amount of work done at home. This episode has once again made me realize how weather-dependent anyone who grows plants is. I knew this already, but periodically go into denial when a particularly choice orchid blooms. The thing about perfumes is that they are (mostly) not weather-dependent, so they fit my scattered lifestyle much better. 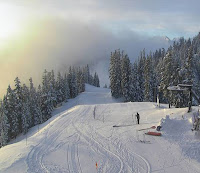 I have definitively decided that I want to sell the orchid-growing business, for a number of reasons. First, it has grown by leaps and bounds, and is now to the point where I need a much larger greenhouse facility if I want to take it to the next level – which is where it’s going, like it or not. Second, I don’t like to be shackled by plants that need care at certain times and have to be protected from weather extremes. I’ve learned that I’m just not cut out to be a farmer, even a farmer of plants that need minimal care like orchids. In case you wondered, Michael takes care of the regular garden.

I’ve been thinking about selling the orchid business for years, but it’s come to a critical point now, so if you know anyone who would like to become an orchid grower, please send them my way. They would need a greenhouse, but everything else is in place for someone to have a turnkey business.

[All photos are mine except for the last one, which I grabbed from the local ski area webcam - always a good source of snow pics!]
Posted by Ellen at 2:36 PM 4 comments: