WINNER OF THE INCENSE DRAWING 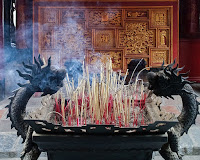 It's taken me longer than I intended, but I've finally gotten around to posting the winner of the incense drawing. It is LAURIE BROWN.

Please e-mail your complete shipping information to olympicorchids at gmail dot com. Any unclaimed items will be rolled into the next prize package.

[Incense photo from Wikimedia]
Posted by Ellen at 2:32 PM No comments:

INCENSE AND THE MONDAY GIVEAWAY 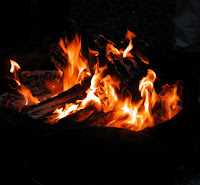 Incense has been around so long that no one really knows when, where, or how it originated. It has probably been used almost since humans discovered how to use fire. If you’ve ever sat around a campfire or walked on a winter night when people were burning aromatic wood in their fireplaces or stoves, you might agree that the idea of burning plant materials and resins came from smelling something amazingly good while using a fire for warmth, to cook, or for other purposes. The challenge then would have been to discover what material produced the pleasant odor and isolate it for burning to mask bad odors, for pleasure, or as a ritual. 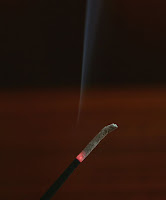 I’ve always loved incense, and tend to want to try everything that’s available. As a result, I find that I have some favorites and some I don't like as well. Of the sticks, one of my favorites is Nippon Kodo’s Seiun joss sticks in Chrysanthemum scent. However, I have gone more and more to using raw materials on a burner, especially frankincense - and oud on special occasions. I also like to experiment with all kinds of other “burnables”, from resins through woods and grasses.

With any sort of experimentation, you win some you lose some. However, in this case winning and losing are subjective because what I enjoy is different from what you might enjoy. I have a big incense collection, some of which I’ve tried and will never use. To pare the collection down to a manageable size, this week I’m offering a random drawing and giveaway of a set of several types of manufactured incense sticks. To be entered, just leave a comment saying what type of incense you enjoy.

Unfortunately, incense packages are bulky and would cost more to ship than they're worth, so this is a US-only draw. The winner will be announced early next week.

[photos are from Wikimedia]
Posted by Ellen at 12:24 PM 8 comments:

SABBATICALS, FRUSTRATION, THINGS THAT SHOULD BE EMBARRASSING, AND THE SILVER LININGS TO IT ALL 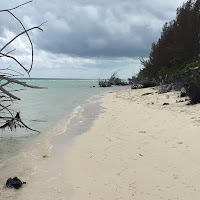 First, about sabbaticals. Ever since our summer trip to the Bahamas, I’ve been unintentionally keeping a low profile. I didn’t release any perfumes in 2016, I didn’t work much on new ones,  and I hardly posted anything on this blog. Earlier this year I realized that this is Olympic Orchids Perfumes’ seventh year in business, so it seems logical to rationalize this lack of activity by my being on sabbatical this year, which, for Olympic Orchids, starts and ends in July. In academics, sabbaticals are a longstanding tradition that helps protect us from burnouts, gives us an opportunity to try new and risky things, formulate new ideas, and come back with greater-than-ever enthusiasm and creative plans. Now that I’ve officially (in my mind, anyway) declared myself on sabbatical until July 2017, I’ve gotten back into the studio, engaged in a flurry of activity that culminated in mods of several new fragrances that are to be released this year, and will be working mostly behind the scenes to bring some new features to my business websites, which are badly in need of attention.

Now, on to frustration. We were planning to travel to San Francisco this weekend for a trunk show at Tigerlily Perfumery last night, followed by the Taste TV Fragrance Salon today. However, our late morning flight from Seattle to San Francisco was cancelled. The airline rebooked us on an afternoon flight, but when we arrived at the airport the status of that flight was unclear. It was delayed twice, and by the second delay it became clear that we would not arrive in time for the Tigerlily event and highly probably that nothing would be flying out that night. We opted not to spend the night in the airport waiting for the weather to improve, so cancelled everything. 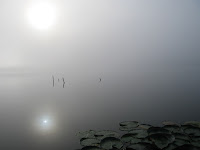 The airline people were as helpful as they could be under the circumstances. They were upfront about the cancellations and delays and the reasons for them. They tried to rebook us via Oakland, but there was a huge demand due to the problems in San Francisco and we wouldn’t have arrived in time anyway even if we had scored a flight. In the end they were cooperative about cancelling our reservations entirely.

The biggest sources of frustration were our powerlessness in the face of weather issues and the fact that I was looking forward to bringing preliminary versions of three new perfumes to the events. However, I did learn that traveling in winter is not a sure thing in a region where we get severe winter storms and dense fog. The whole experience also renewed my belief that most airline personnel are competent and trying their best. 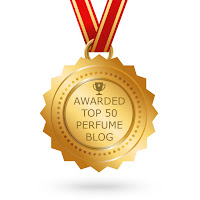 And on to embarrassment. This morning I received an e-mail informing me that this blog had been named one of the “Top 50 Perfume Blogs”, along with a badge to display. I’m not sure how many perfume blogs there are in existence, but at the very least this award indicates that we are on someone’s radar. Those considerations aside, I’m delighted that this blog has achieved a significant level of recognition and grateful for having been chosen to be among so many excellent blogs and online publications.

I will admit that it feels a little embarrassing, given how little I have posted here since last summer. The silver lining is not only the recognition, but also the impetus to work on making the blog even better, and worthy of recognition. Thank you to everyone who has continued reading during my "sabbatical"!

[Bahamas beach photo is mine, fog photos are from Wikimedia, and the award image is from Top 50 Perfume Blogs]
Posted by Ellen at 2:26 PM 3 comments: