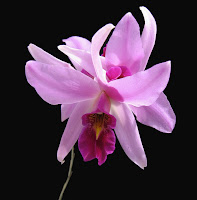 On this gorgeous, sunny fall day, Laelia anceps is in full bloom, with three perfect flowers on a stalk that’s almost 3 feet (1 meter) long. The flowers are large, causing the stalk to arch over gracefully and sway in the slightest breeze. I prefer not to stake my orchid flower spikes because I like to see how they would grow naturally and how they would move to attract pollinators. This year the petals have a bit of a dark magenta splash on them, and are quite beautiful. The whole flower sparkles in the sun with tiny, shimmering points of light. If I were an insect, I would be strongly attracted to the flowers just based on their appearance, which is as nice as that of any hybrid.

My first impulse as an orchid grower is to pollinate the flowers, but I have an orchid show coming up next weekend in Seaside, Oregon, and hope that the flowers will last long enough to make it there and back before doing anything to them.

Since reading up on orchid fragrance analyses for the making of the “Orchid 17” accord for Sonnet XVII, I’ve started to recognize individual aroma chemical molecules in the fragrances of the orchids that bloom in my greenhouse. What I smell strongly in Laelia anceps is gamma-decalactone. This molecule is a component of many fruit and flower fragrances including gardenia, peach, apricot, and osmanthus as well as fermented products like beer. It’s also used as part of the pheromone communication systems of certain insects. For example, male scarab beetles emit it to attract females – the legendary “chick magnet” fragrance, if you’re a scarab beetle.

In most of the fruits and flowers that contain gamma-decalactone, it’s buried in among many other things, simply rounding, flattening, and mattifying, the scent, but in Laelia anceps, it’s up front and center stage. It’s described by The Good Scents Company as “fresh, oily, waxy, peach, coconut, buttery, sweet”, but that really isn’t how it smells to me. TGSC’s description is more a list of odors that might contain the molecule rather than the odor of the molecule itself. To me, it’s flat or slightly concave, matte, neutral colored, and almost sour, sort of like the smell of a sour dishrag - a sweetish, slightly fermented scent. Laelia anceps surrounds its overdose of gamma-decalactone with just enough bright, fresh floral notes to push it barely over the edge into pleasant territory. I’m sure the insects would love it if I put it outside for them.