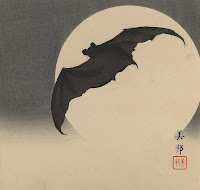 Yesterday I had planned to write about something having to do with garden design for “philosophy Friday”, but two pieces of breaking news took precedence. Fortunately and unfortunately, neither was an April Fools joke.

The good news is that it was officially announced that Bat, the fragrance I made for Zoologist Perfumes, is a finalist for the Institute ofArt and Olfaction Award! This is especially exciting because it was one of my all-time favorite projects.

The bad news is that there was a news article announcing that, for the first time, a bat with white nose syndrome was found on the West Coast, in Washington State. Of course I’m thrilled about Bat being a finalist for the prestigious IAO Award, but at the same time I’m deeply disturbed and saddened to hear that the fungal infection that has killed thousands of bats east of the Rockies has now spread to the West.

It seems that the fungus that infects the bats is normally and ubiquitously present in the ecosystem in many parts of the world, and has always been around. Only within relatively recent times, though, have an increasing number of bat populations in North America been sickened and killed by it.

Most discussion on white nose syndrome seems to focus on keeping the public out of caves with hibernating bat colonies (a good idea!), creating captive breeding colonies that are free of the fungus in the hope that they can one day be released into a “clean” environment,  controlling the fungus itself, diagnosis of the disease, and/or treating existing infections. The prevailing theory seems to be that bats in the US have no resistance to an organism imported from Europe, reminiscent of the mass deaths of indigenous Americans from European diseases like smallpox several centuries ago. However, an additional underlying question is whether bats might have suddenly become susceptible to pathological infection by a benign organism that has been present in their environment for a considerable amount of time.

I can think of a whole host of factors that could affect the physiological state of bats, all of them ultimately traceable to human activity. There’s mass destruction of habitat by developers, widespread spraying of pesticides that may accumulate in the fat stores of hibernating bats and, of course, climate change. With warmer winters, it is possible that hibernation is disrupted, resulting in premature use of stored energy and near-starvation. Although the fungus thought to be responsible for white nose syndrome grows best in cold temperatures, warmer winters might optimize the temperature range of caves and promote growth of the fungus to the point where it overwhelms the bats’ immune systems. 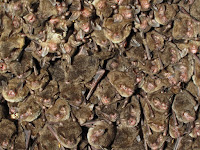 Obviously these global factors, including the unprecedented rapid worldwide distribution of all human, plant, and animal diseases, are not easy to fix, especially given how far down the slippery slope the world has already slid, so it’s tempting for people to focus on treating symptoms and hoping that natural selection kicks in soon, creating bat strains that are resistant to infection. However, bats do not reproduce fast and many species need to live in large groups, so such a narrow and short-sighted strategy may not meet with success in the long run, especially if bat colonies are decimated to the point of unsustainability.