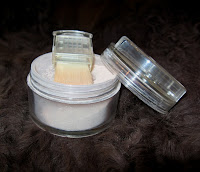 Powder is a note that I really haven’t yet explored in perfumery, but a couple of things made me start thinking about it. First was a conversation on Basenotes about creating a powdery note, and second was an olfactory experience that I had last Saturday in which the powdery note played a key role.

M had gotten tickets to an outdoor concert by Further, which is the latest reincarnation of the Grateful Dead. As soon as the music started, so did the rain. People in Seattle don’t really seem to mind too much, and patiently stand out in the rain like a pack of wet dogs, but we were happy to have our little shelter made from a couple of low-rider folding chairs and a huge umbrella, in an ideal spot up on the top of a hill.

After the break, I started smelling something completely unique and wonderful. No, it wasn’t just the fumes of the combustibles being used all around us, but that did contribute to it. It was a sweet powdery scent combined with the herbal smoke and the smell of the wet ground and vegetation. I assumed that the powder note was someone’s perfume, but I suppose it could have been something blooming in the park. Whatever it was, the whole gestalt was amazing. These are notes that one normally wouldn’t normally think of combining, but they worked beautifully together. Of course I started thinking about a perfume using these components. I think of way too many perfumes - more than anyone could make in a lifetime - but it’s fun and sometimes leads to my mixing up useful accords.

Night before last, when I got tired of grading papers and working on a grant application that I was writing, I went into my “lab” and started working on a powdery accord. I used ionones, some synthetic musks, a foody vanilla, coumarin, heliotropin, a little dab of this and a little dab of that, and to top it off I added a dollop of sarsaparilla hoping that it would help make the powder a little bit sweet and gourmand. I don’t have the perfect mix yet, but it certainly smells powdery, especially after it dries down a little. I put some on yesterday evening and still smell it this morning. I now have to tweak the proportions and figure out what to do about the strange top notes, but I think I’ve got a basic powder formula. Yeah!!!

Some orchids have a powdery note in their fragrance, so this will eventually allow me to create scents based on those flowers as well as a perfume called “Reincarnation”, or something like that.

By the way, the musicians in Further are really tight and sound far better than any other reincarnation of the Dead. We had a good time, rain and all.

Note added later: After sitting for a while, the strange top notes disappeared, and the powder scent seems much more mellow than it did initially. Now for some testing on blotters and my skin.
Posted by Doc Elly at 9:59 AM