This week two of my cattleyas have started to bloom and both of them have a huge indolic component to their fragrance, especially when the flowers first open up. A lot of cattleyas seen to be heavy on the indole at first and then mellow into something else after a few days. 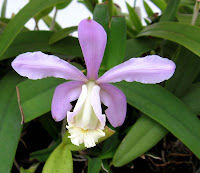 One of the plants that’s blooming right now is Cattleya harrisoniana, a species native to South America. The flowers of this particular plant are medium lavender with a big cream-colored lip. The other plant that I have is white to begin with, gradually turning a light lavender as the flowers mature. In the morning the plant that’s blooming now has a strong fragrance that’s like artificial grape, almost like Dior Poison, with a lot of indole mixed in. It will be interesting to see how it develops over the life of the flower. 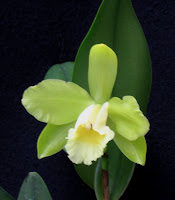 Another plant that’s blooming now is Blc (Brassolaeliacattleya) Hawaiian Passion. The picture shows the first time it bloomed, with just one flower. This year it has a cluster of six flowers, all closely bunched up next to one another. The first couple of days its scent was almost pure indole! After that it started developing a creosote and citrus fragrance, but the indole is still there. I’m not sure it would make a good perfume unless it mellows a lot, so I’ll probably just enjoy it while it’s blooming.

Indole is usually thought of in connection with white florals such as jasmine and gardenia, but it’s also part of the fragrance repertoire of a great many orchids.
Posted by Doc Elly at 9:22 PM