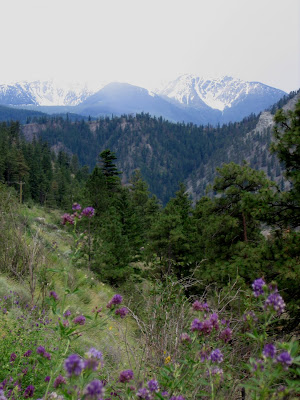 The trip to Canada was every bit as much of an adventure as I had anticipated. Driving for 14 hours straight is not so bad if two people take turns, although doing it in the rain isn’t much fun. 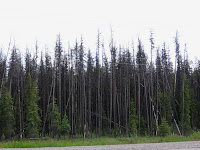 After leaving the Thompson River desert area at Cache Creek, the first thing that struck me was the huge expanses of dead trees everywhere along the roadsides. I know that’s not a very flattering introduction to British Columbia, but that’s how it is. It looked as if all of the evergreen trees in central BC had been wiped out by some disaster and, in fact, they had. In Fort St. James we learned that the dead trees were mostly lodgepole pines that had been infested and killed by pine bark beetles. Even talking to people who work for the forest service, no one seems to know why the beetles, which are native to the area, suddenly became an epidemic. The only good thing is that the dead trees are gradually being harvested and used for pellets to burn in pellet stoves and for lumber, which reportedly has a unique purplish tinge created by the beetles. I think it remains to be seen whether the lodgepole pines grow back or are replaced by resistant species.

Two major highlights of the trip were a spontaneous invitation to a big wedding that took place outdoors in the cold and rain beside the lake. The groom was from one of the First Nations, and the bride from one of the big Menonite families, so it was good to see people from different camps coming together for a happy occasion. The home made berry wine at the reception was a real treat!

The second highlight was a boat trip around Stuart Lake where we saw petroglyphs of unknown origin and Simon Fraser’s inscription on the rocks from when he first explored the area. I forgot to bring my camera, so don't have any photos. I ate moose sausages for the first time. In case you're wondering, they tasted like hamburger flavored with a little sage. 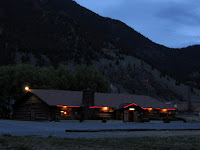 We took two days to come home, doing the bulk of the driving in the northern part where the drive is fairly monotonous. The first night we made it to the start of the desert area around the Thompson River. We had pizza and beer and played pool at the Log Cabin Pub, and then camped near there. I find it easier to relate to the desert landscape than to the lodgepole pine forests. One thing that I thoroughly enjoyed was sticking my nose up close to every ponderosa pine I encountered to smell the delicious fragrance given off by their bark. It’s a woody, caramel-vanilla scent that would make an excellent perfume base. In fact, I have considered remixing Arizona to play up the base notes of the ponderosa pine, maybe even renaming it Ponderosa. 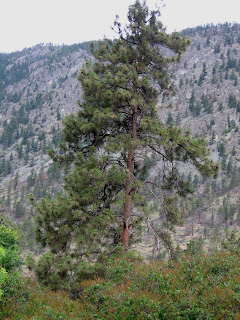