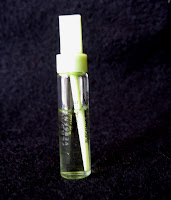 It seems like I’m always complaining about something. I’ve written about bad sample designs before, but recently I’ve encountered some new lows in sample packaging that I feel compelled to write about.

When I got a carded sample of Versace’s Versense, I thought the vial was cute with the little tab sticking up from the light green stopper. Little did I suspect that it would be the stimulus that prompted me to write about new lows when it comes to vial design. It turns out that the “stopper” is actually a cap that is permanently fused to the vial, and the dabber stick is fused to it by a thin layer of plastic. 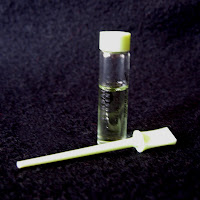 To get at the contents of the vial the dabber stick has to be carefully wiggled back and forth by the tab and broken away from its attachment to the cap. Once the thin plastic seal is broken, the dabber stick lifts out through a tiny hole in the cap. I needed to use a pair of pliers to remove the dabber without breaking it off from the tab, and I suspect that many people would break it off entirely, leaving the dabber stick stuck in the vial, with no way to retrieve it and no way to reseal the vial. Even though I successfully opened the sample, I suspect the liquid that remains in the vial after taking out a test drop will evaporate rapidly once the seal is broken, since the dabber just sits there on the cap without forming a seal. Does the manufacturer really think that people are going to pour the whole vial on themselves at one go? What a waste, assuming I ever wanted to try the stuff again. Fortunately, I do not. 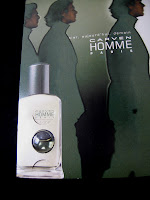 Glass vials that can’t be resealed are not the worst things out there, though. Some manufacturers now use cardboard sheets with a little plastic bubble containing the sample. The Carven Homme pictured here has about 1 or 2 ml of liquid in a clear plastic bubble with a pull-tab on the back to open it up. Once open, that’s it. Single-use, throw away the rest. Again, what are testers to do? Dip their fingers in and dab it on? Pour the whole thing on themselves? Decant it into a real vial with a hypodermic syringe? Did it ever occur to Carven that people might want to try their fragrance more than once before deciding whether to buy it, and don’t want to have to provide their own container in order to do so? I’m not even going to try it once. Things like this deserve to go in the trash.

Right on a par with the plastic bubbles are the moist towelettes sealed up in a plastic or foil packet like the lemon-scented ones given out by eating establishments to clean your hands after eating greasy finger food. I can’t decide whether they are better or worse than the bubble packs. At least they blatantly acknowledge the fact that they are single-use, but I find the whole concept of wiping myself with perfume from a moist towelette off-putting. These go straight to the trash, too. Maybe my snobbishness causes me to miss some of the world’s most wonderful scents, but somehow I doubt it.

Maybe there are other sample packaging lows even lower than the three that I’ve mentioned, but it’s hard to imagine.
Posted by Doc Elly at 9:17 PM