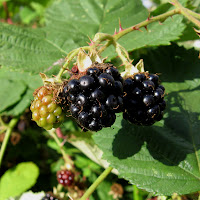 The blackberries that are the plague of the Seattle area are Rubus armeniacus, the Himalayan blackberry, not the native blackberries, which are puny wimps that don’t stand a chance when their Asian cousins move into the neighborhood. According to one of the local government invasive weed sites, the canes can easily grow 6-12 meters long (20-40 feet), and root at the tips wherever they touch the ground. They can grow from chopped-up bits and pieces. They can produce up to 525 canes per square meter! The mature canes can grow almost as thick as my wrist. I know because I’ve chopped down thousands of them.

The Himalayan blackberry was originally introduced to the US East Coast in 1885 by Luther Burbank, because of its large, sweet, delicious fruit. On the East Coast, from what I’ve seen, it stays fairly well-behaved. However, in 1945 it was brought to the Pacific Northwest, where it apparently found ideal conditions and quickly became a Hydra-like monster that has swallowed up nearly every inch of untended land and invaded even the most cared-for and well-groomed yards, gardens, and open spaces. 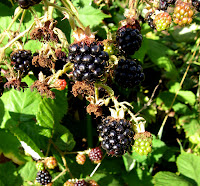 Like the deposed king in Still Life, I wage an ongoing battle with the blackberry vines. However, these blackberries are so devious in their evil ways that they lure us into not ever wanting to destroy ALL of them, so they just continue to proliferate. This year, from mid-July through October, they have been producing masses of juicy, aromatic, luscious fruit. Even though I hate blackberries with a passion, I can't help loving it when I walk along a summer roadside and smell blackberries stewing in the sun before I even see them. Once spotted, I can’t resist hunting for the largest, fattest, juiciest, sweetest ones to eat on the spot.

There are different blackberry smells according to the season. In the winter the evergreen vines have a characteristic moldy, musty smell that comes partly from old dried up fruit and partly from the plants themselves. Anyone who has ever chopped blackberry vines knows the sickly green smell of the vegetative parts of the plant. In spring, the moldy smell mostly dissipates and the plants smell wetter and greener, as the new growth explodes. The flowers in spring and early summer don’t have much fragrance, which is probably a good thing because if they did, I would have even more sympathy for them. As it is, I’m so fond of the scent of ripe blackberries that I can’t bring myself to slaughter them all.

Ripe blackberries in the sun have a dense, dark, jammy-sweet, almost floral and musky fragrance that is like nothing else in the fruity realm. Being in the Pacific Northwest, blackberry capital of the world, I’ll have to eventually use the scent of blackberry fruit in a perfume. I’ve got some ideas, but so far haven’t found a good starting formula for making a blackberry accord, and I haven’t smelled anything very realistic in the world of blackberry-themed perfumery. I suppose I could take a raspberry formula and modify it, but just haven’t tried yet. Oh well, yet another adventure that’s on my list of things to do!
Posted by Doc Elly at 10:13 AM