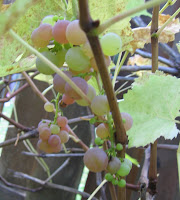 For years we’ve had a few different varieties of grape vines growing in the back yard. It seems that every year they put all of their energy into rambling all over the place, climbing over the fence, flopping into the paths, and invading the garden spaces. We ended up removing two vines that got too big for the area where they were growing, but have left two others that were planted in a more forgiving space. As I recall, one was a Concord grape and the other a Champagne grape, although I could be wrong. The Concord has languished, never producing so much as a single grape, and not much in the way of a vine. The Champagne grape, on the other hand, goes berserk with vegetative growth every year, producing a few stray grapes along the way, most of which have always been consumed by the quail before we could even taste them.

This year I decided to adopt a kill-or-cure strategy. After the vine bloomed this spring, I kept cutting the canes back to the point where bunches of baby grapes were growing. Maybe not regularly, but enough so that some of the plant’s energy actually went into the fruit instead of over-the-top vines. A few weeks ago I went out and harvested the first four bunches of grapes, and what a treat they were! We ate them, picked right off the vine, still chilled by the cold, wet, outdoor air.

The small grapes are a beautiful, translucent, frosted lavender-pink, with no hint of the sliminess that many home-grown grapes have. They’re just sweet enough, but not too sweet, with subtle flowery and fruity flavors. Although they’re not extremely sweet, they have no hint of sourness, which makes for really good eating. As far as I could tell, they are seedless. In the subsequent weeks we’ve harvested quite a few more bunches, just as good as the first ones. There are still a few stragglers left on the vine, so we’ll be having at least a taste of grapes through the middle of November.

I can imagine that these grapes could be used to make champagne. It would be a light, dry variety. Their fragrance, picked up by the nose while eating them, isn’t the heavy, methyl anthranilate smell of concord grapes or grape artificial flavor. There’s a slight hint of that, just enough to identify them as grapes, but most of the fragrance is a juicy, sweet-astringent, complex accord of flowers and unidentified fruit notes. If they were a perfume, it would be a light, one with a paradoxical wet-dry feel.

Now out to pick the last of the grapes!