I'm  finally coming to the end of the Devil Scent series, at least the ones I could get my hands on. These are the fourth in each series, names notwithstanding, so all that's left to review are the two Liliths. They're coming soon!

Neil Morris Devil Scent #3
At first this smells a little more bitter than the others, with herbal notes that remind me of Amanda’s compositions in spirit, but of course nothing like the same scents in reality. At first it’s strong and full of intense green cut-grass and floral notes, accompanied by campfire smoke and spice. I’m probably one of the few people who dislikes the smell of fresh-cut grass, and here I find it incongruous when smelled next to the other notes. Sometimes incongruous is good, but here it’s just strange. Eventually the cold, wet, cut grass goes away, leaving a lovely floral-incense fragrance that’s rather subtle and warm, definitely more to my liking. As it runs its course, it eventually develops into a musky labdanum and incense base that smells a lot like some of my own Dev bases. That phase lasts a good while, subtle but clearly present. Even after a few wearings I’m still trying to figure out what to make of Dev #3. Maybe the mix of cold and dead, illustrated by cut grass, and warm, illustrated by smoke and spice, depicts the conflicted feelings of the heroine when the lost love of her life reappears. 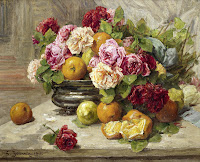 Coda by Amanda Feeley
Starts out very spicy, scented with lemongrass and rose, much warmer than her other three. The same bitter herbs that were in the first three Devil Scents are still there, just buried under the strong spice and floral notes. As Coda develops, it becomes sweeter, almost candied, with vanilla undertones. It is full-bodied and rich, quasi-gourmand, and I really enjoy it a lot. I think it’s all-natural, so the sillage is very good, and it lasts for a respectable time. After wearing it a few times I’ve discovered that the lemongrass-citrus and herbal notes at the beginning are more or less prominent on different days. Overall, this is a soft, sensuous, romantic fragrance, a beautiful, happy ending to a difficult story. Amanda, you must release this so that everyone can enjoy it!

My DEV #4 (Reprise) is a calm variation on the starting notes of DEV #1, a stripped-down version that emphasizes the labdanum, with just enough of the other notes to recall the promise held by the beginning of the journey and to suggest that a new journey is about to begin.

Once again, the three different perfumers’ interpretations of the story’s ending fit together like pieces of a puzzle to provide a coherent whole. Neil’s perfume suggests that the heroine has an approach-avoidance dilemma when Dev comes back into her life, one that is ultimately resolved in calm resignation. Amanda’s interpretation is a joyous celebration of the end of a long struggle, and the sweetness of being reunited with a loved one. Underlying the sweetness is the memory of the bitterness of the past, but the bitter notes make the sweetness all the more beautiful. My interpretation is that of a purifying and cleansing process in which the new beginning of the relationship is stripped of its old baggage and is free to continue on an honest basis of mutual understanding and acceptance. I was particularly struck by the fact that both Amanda and I chose to interpret this phase as the ending segment of a musical piece. In my version it was a reprise of the overture that included the final cadence, and in Amanda's version, it was a climactic and happy final ending.