FOOD, FRAGRANCE MATERIALS, AND THE FUTURE 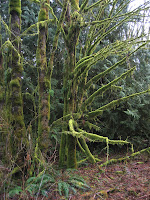 Living in the dense, damp, obscenely green Shangri-La of our sheltering mini-rainforest, it’s hard to imagine that all is not right with the world.  However, all too often these days I read articles like this one, describing how we humans are creating conditions that will lead to a future crisis, probably within our own lifetimes, or at least those of our children, sending humanity the way of the dinosaurs in the worst case scenario, or into some chaotic end-of-the-world bad science fiction movie scenario in the best case.

The polar caps and glaciers are melting. The last time I flew over Greenland, most of the land was brown instead of white as it used to be, so I’ve seen the evidence with my own eyes. Carbon dioxide in the atmosphere has reportedly reached the highest level since humans have been on this planet, based on what current science can estimate from the historical record. The article I read this morning predicted that there will eventually be a massive collapse of our food supply due to drought, crop disease, and other factors.

These predictions are not bad science fiction, they are evidence-based and credible. Food is pretty low on Maslow’s hierarchy of needs, so a struggle to obtain food would presumably eliminate most higher-level activities, including perfume-making. On second thought, maybe perfume would become more important, in order to mask the unpleasant odors of life in a chaotic society. Spices could once again be an important currency, with wars fought over them. Highly spiced food is more satisfying than bland food, so people could learn to eat less and not miss the vast amounts of tasteless, mass-produced calories that are currently consumed in the US.

Unfortunately, spices and natural perfume materials depend on the same agricultural conditions as food crops, so the factors that lead to disruption of food production would simultaneously lead to disruption of fragrance material production. In fact that is happening now. Sandalwood, rosewood, and agarwood are just about gone. They’re being farmed to some extent, but it’s a slow process, and one that could not be sustained in the face of major alterations in the world’s climate.

I don’t know what the solution to the problem is, and I’m not even sure there is one at this point other than to let nature take its course and restore homeostasis to the earth through means that will be, at the very least, unpleasant to humans. What each of us can do, in our own small way, is to think before engaging in unnecessary use of resources and the accompanying depletion and/or pollution of the environment.

The most egregious example I’ve seen recently was a mother in our neighborhood who parked her hulk of an SUV by the school bus stop, motor running, waited for her child to arrive, and drove him less than 200 meters to their house. I stopped my run to watch the unfolding of this real-life scene that would have been unbelievable if presented as a comedy skit. If people would stop engaging in this sort of absurdly lazy behavior, it would at least be a start in the right direction.

[Photos of Texas dust storm and dead corn adapted from Wikimedia]
Posted by Doc Elly at 8:18 AM