USING THE EXTRA HOUR TO STEP OFF THE TREADMILL

It’s that time of year when the US engages in its quaint ritual of switching time zones. Just as flying west and gaining time is always easy, so is switching back from Mountain time to Pacific time. I know, no one calls it that, but that’s what it is. My students think it’s some sort of natural phenomenon like tides or the shortening of days in winter, so I have to explain to them that it’s an arbitrary decision made by state and national governments to tinker with the time zones just because they can. Every year the switch back to standard time comes later in the year and the jet-lag-inducing switch to “daylight saving time” comes earlier, so I assume that eventually we’ll all just move one time zone to the east and be done with it.

It’s been weeks since I had time to write a blog post, so what better way to use the stolen hour that was just returned to us than to write something and try to banish the block that always occurs when I wait too long between posts? What to say? It doesn’t much matter what, the important thing is to put words on the page, deal with the annoying problems Google created that kept me from logging on to the blog (I had to invite myself to contribute to it to get it back online) and get the prose flowing again.

The natural rhythms of academia have reached their annual peak of frenzied activity, so I spend my days scurrying from one class or meeting to another and my evenings and weekends preparing for classes, grading papers, and doing all of the busywork associated with all of the time-consuming committees that I somehow ended up on this year. Next weekend there’s an orchid show, so I have to prepare for that. Our theatre show opened this Friday and is running smoothly, so most of the work for that is finished. Just as in teaching a class, performing is the easy part where no one sees the hours of work that were spent to make it seem effortless. 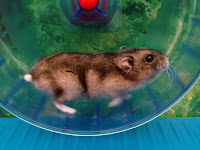 The perfume business has pretty much been running on momentum since late August, so I feel good if I manage to fill and ship orders once a week. The good news is that Michael now helps a lot with shipping. I’ve once again increased my production capacity, so I spend all of the income from the perfume I sell buying materials by the kilo as the smaller amounts run out. One of these days it will reach equilibrium as the orchid business has, but that’s still a ways off.

More than anything else, this is just a shout to let all of my readers know that I’m still alive and well despite the fact that I’m buried in a deep, dark sinkhole of over-commitment, running as fast as I can just to keep up like Alice in the Red Queen’s race, a hamster on its wheel, or those poor souls who run on treadmills at the gym. I have never understood the fun of running and not going somewhere, but I suppose the treadmill is symptomatic of a society in which it’s useful to have training in working extremely hard to go nowhere, and feeling safe while doing it because there’s no unknown territory. Not for me. I’m stepping off the treadmill that society creates, at least for a delightful hour, to think about things and maybe actually go somewhere.

[Illustrations from Alice in Wonderland and Alice Through the Looking-Glass; hamster wheel and treadmill from Wikimedia]
Posted by Ellen at 12:45 PM