We lucked out on the weather for the orchid show in Seaside, Oregon weekend before last. After a week of record monsoon rains all along the northwest coast, the sun came out and things had a chance to dry a little.

Working an orchid show is like working any other trade show – major stress for a few days before, preparing and packing everything, getting to the venue, and setting up. Once the show opens, it’s having to be constantly “on” for two days, but that’s like a vacation compared to prep, travel, and load-in. 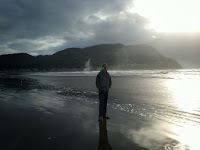 The good thing about the orchid show was that it closed at 4 or 5 o’clock on both days, so we were able to go out and enjoy the beach in the evenings. The first evening it was calm and clear, and the tide was farther out than I’ve ever seen it. In addition to the regular beach there was a good half-kilometer of sand that must usually be underwater. The clammers were out in droves, hunting for little creatures in the sand with shovels and some sort of suction devices.

I was barefoot, and kept thinking that soon I would be wading in the surf as I headed west, but the sand with a thin layer of water just kept going on and on. The low sun shining on the thin water layer gave me the feeling of walking on the surface of the ocean. As the sun set, the film of water reflecting the light looked just like shimmery gold foil. Now I know what it would feel like to walk on water! 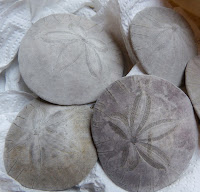 Everywhere we looked there were sand dollars washed up, lying on the sand, covered by that shining film of water. Many of them were intact, perfect circles with the 5-petaled design and 5-pointed star in the very center. That evening we collected 48 perfect sand dollars! I was afraid they might stink up our hotel room that night with rotting invertebrate bodies, but they just emitted a pleasant ocean scent of seaweed and salt water, so the little animals that inhabited the shells must have been long gone.

I think maybe I should make a Seaside perfume and give away a sand dollar with each bottle!  What would Walking on Water (WOW!) smell like? Salt, iodine, fresh seaweed. fresh air, water, and not much else. It would be like the cathartic, clean feeling one gets from walking on the beach, but without any conventional “aquatic” notes, which really don’t smell like water or fresh air. Something to think about.
Posted by Doc Elly at 9:34 AM