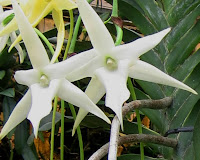 A couple of days ago I wrote about reformulating Little Stars, but as I’ve been working on it, it’s quickly morphed into a different genus of white-flowered, night-fragrant orchid, an angraecoid of some sort. Angraecoid orchids are native to East Africa and Madagascar, where they grow in dry forest areas, but smell strangely similar to the South American Brassavola species after which Little Stars was named. I think I'll call the new formula African Orchid - dibs on the name, people! You saw it here first.

Little Stars has its fans, so I decided not to pull it entirely, just supplement it with a new white night-fragrant orchid scent. Angraecum orchids have a fragrance reminiscent of jasmine, ylang-ylang, carnation, and sometimes root beer. Those main heart notes are combined with my special orchid 17 accord, which gives it a moist, soft, dark, brooding touch, along with a base of high-end musks and light vanilla. 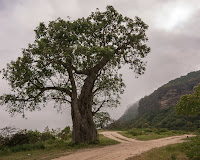 I’ve tried several iterations of the first mod and am liking it quite a bit. It takes a while for the materials to blend, so there’s a waiting period to see exactly how it will turn out, then more waiting periods as it goes through the initial series of tweaks to get the proportions of everything right and add whatever modifying notes it needs. I already like it better than the original Little Stars, though. It’s lighter and more juicy, less in-your-face woody, less heavy on the ylang-ylang, which can be overpowering, and smoother, with a tiny bit of a fruity accent. It’s actually more like a real, natural orchid fragrance.

I’m going to work on African Orchid over the holidays, as well as a few other new formulas. Testers should finally be getting a package of things to smell in January! With luck, I'll be able to launch it at the San Francisco Fragrance Salon in March.

[Angraecum sesquipedale photo is mine; East African baobab tree photo adapted from Wikimedia]
Posted by Ellen at 11:33 AM