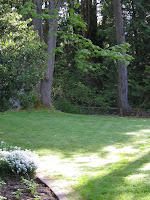 During the winter holidays we enjoy our cut Christmas trees and evergreen boughs fashioned into wreaths and swags.  Evergreens brighten up the dark winter days, scent the dry air and bring the beauty of the forest into our homes. The City of Issaquah, WA USA, my home for over 35 years, prides itself on its concern for the forests and proudly announces on its website the designation by the Arbor Day Foundation as a "Tree City USA". 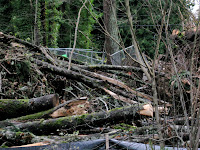 Earlier this year the acre of forest upslope from our home was sold to a developer and a city permit was issued for one large house.  I had seen this developer in action before as he clear-cut another lot in the vicinity.  I was concerned about the forest, potential runoff, and the habitat that would be destroyed.  I approached the city several times with my concerns and was assured that they would be monitoring every step of the process and would preserve as many of the large trees as possible.  HA!

As the old trees were felled and their roots were ripped out by backhoes. I felt like I was experiencing a personal assault or a physical trauma. The smell of "tree blood" was almost overwhelming. Eventually two large logging trucks hauled away the remains of the huge cedars and firs. What I describe below in a letter to the city is not an isolated incident but has been going on in Issaquah for some time now.  I knew that this "permitted" destruction of forests and habitats was nasty and wrong but I just didn't know how horrible it was until it literally happened "in my own backyard".

[Ellen's note: The following is a letter that Gail sent to the City of Issaquah] 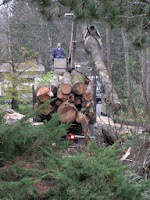 Issaquah promotes itself as a "Tree City USA" and posts that information on its website.  I would like to know what it means to be a "Tree City" and wonder how Issaquah can consider itself to be tree friendly.

Over the past three days the acre of old cedars and fir trees adjacent to our property was permitted by the city to be basically "logged off" by a developer.  I'm sure a few of these felled trees were growing here well before our house was built in 1969.  I spoke with the city several times before this happened hoping that, in line with the tree cutting permit process, some of these large, old trees could be preserved. All that the city was able to manage was the preservation of one large fir, several spindly Acer macrophyllum and a couple of small cedars. 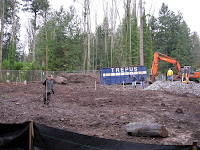 Yesterday the air outside was thick with the odor of cedar and fir sap (the smell of tree blood).  Huge piles of logs and limbs were everywhere. A large female bobcat and two almost fully grown kits were running around our yard in fear and climbing our trees, while the backhoe on the adjacent lot ripped the cedar roots from the slope. The day before, a large buck wandered through our property looking frightened and puzzled.  The whole scene reminded me of the destruction depicted in Hayao Miyazaki's animated movie Princess Mononoke.  How can the city of Issaquah consider itself to be environmentally friendly when it allows this kind of habitat destruction?

According to Issaquah's website it looks like, with the loss of this acre of trees, we will now have 13 more tons of dust and gas in the atmosphere.  I know it is too late, that the damage has been done and cannot be repaired, but I think someone on the city staff should come out here and take a look at this mess before the developer hauls it away!   I would like someone on staff to see what the permitting process allows to happen in "Tree City USA".

[All photos are Gail's, top to bottom, my captions and comments: 1) The back acre before, viewed from her yard; 2) Tree blood! 3) The corpses are hauled away; 4) The wasteland. Apparently the logging operation is called "TREPUS". Tree blood turned to tree pus??? Appalling.]
Posted by Ellen at 10:51 AM