Last weekend we participated in the family outing to gather hazelnuts from a farm somewhere out in the pre-foothills of Mount Baker, halfway to Canada. Never having gone on a hazelnut-hunting safari before, I had no idea what to expect. After a long trek through the bush we arrived at the farm, where we were instructed on how to tell good nuts (light-colored and shiny with no dark spots) from bad nuts (dark, overly striped, moldy, etc), given buckets and big tubs, and turned loose into the orchard. As I looked at the ground, I despaired of ever finding enough nuts to fill a small bucket, let alone a tub. I picked up a few and tossed them into the bucket.

Then I hit the mother lode and started seeing nuts all over the ground. They blended in with the fallen leaves, and some were hidden underneath leaves, but they were there in profusion. I started picking them up with both hands at once. In no time the bucket was full and emptied into the tub. I was now in a brainstem-directed hunter-gatherer frenzy, picking up hazelnuts like a machine, waddling along the ground in a squatting position as I worked. Michael was equally efficient, in his own way. After an hour or so, our tub was full, weighing in at 45 pounds. After a picnic lunch, we went back to work, quickly filling a second tub. 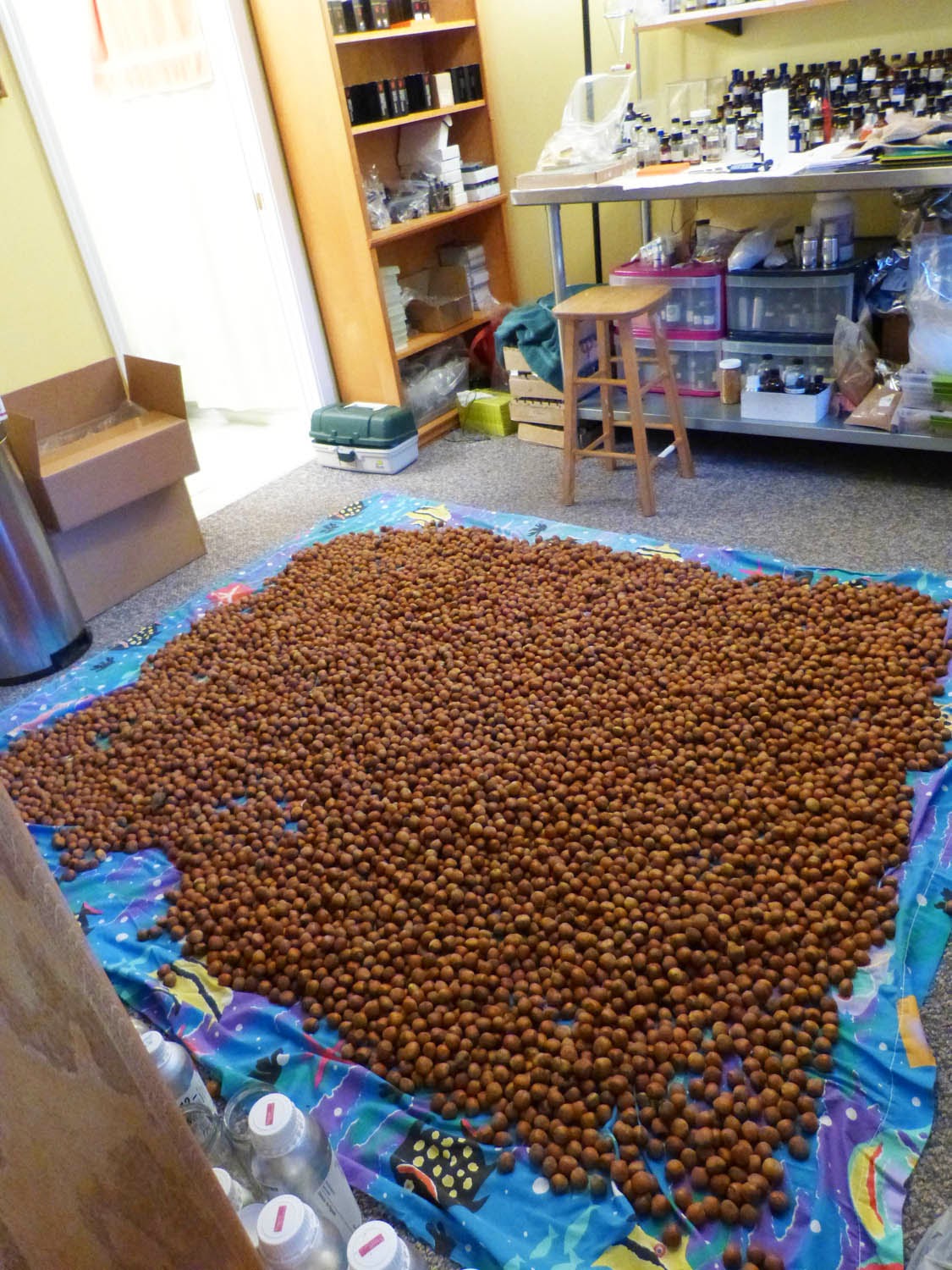 We came home with 90 pounds of hazelnuts! We had been told to spread them out on a sheet in a large space and let them dry for 2 weeks or more before roasting them. The only space that seemed appropriate was in the middle of the floor in my studio, so right now I’m having to tiptoe around the edges of a sea of 90 pounds of hazelnuts. I’m actually getting used to not being able to step on most of the floor. 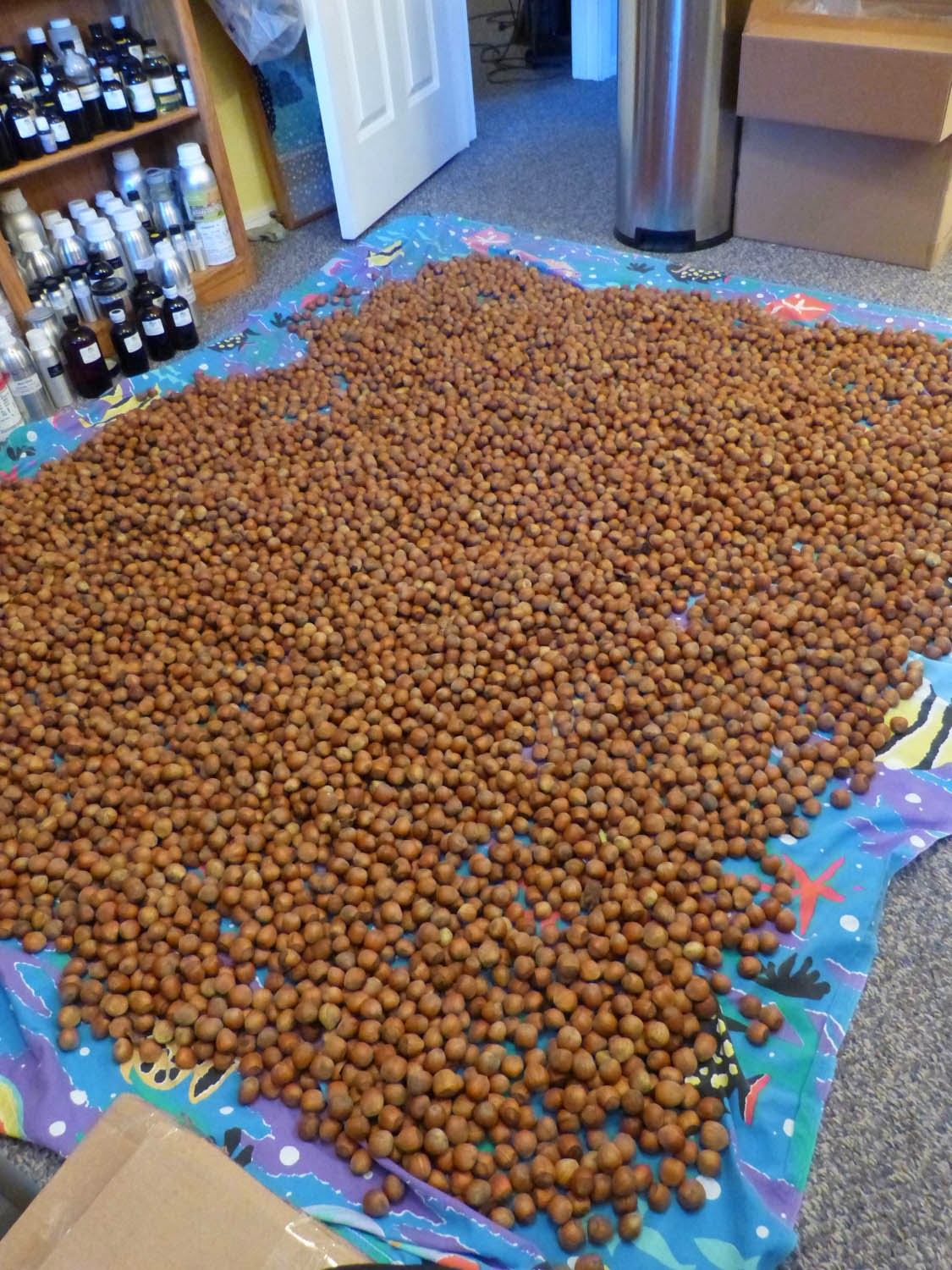 The first day, the smell from the freshly gathered nuts was overpoweringly earthy, like loam, dead leaves, and mushrooms. Over the next couple of days it subsided, but it’s still there. Smelling the outsides of the nuts made me want to haul out the hazelnut CO2 extract that I acquired a while back but haven’t yet used in a perfume. It’s fairly subtle, with a distinctly oily smell and top notes that are a bit like the nuts themselves. It’s not Nutella. I think it could easily get overpowered by most other materials, so would have to be used in large quantities as a featured note in a simple, subtle fragrance or as a modifier in a complex one, contributing some nutty top notes and oily, slightly animalic ones to the middle.

I was told by one of the instigators of the hazelnut trip that when they’re roasted they give off a strong earthy scent, so now I’m wondering what would happen if I were to tincture hazelnut shells. It might produce a beautiful, earthy scent. Combine that with hazelnut CO2 extract, and who knows what might result? It’s probably worth a shot.
Posted by Ellen at 8:23 AM