As a plant and perfume enthusiast, what could be more perfect than growing a selection of plants traditionally used in perfumery? I’m not talking about roses and orange blossoms, I’m talking about more exotic things like frankincense and myrrh trees.

Recently I’ve gotten into growing cacti and succulents, thanks to a cactus that bloomed and produced 91 babies. When I saw baby frankincense trees for sale, I knew I had to have one. My first desert tree acquisition was a Boswellia carteri, the species most commonly used to make resin and oil [photo on right]. When it arrived, it looked like a bare-root dead stick with no leaves. I planted it, watered it, and within a few weeks some tiny, frilly leaves had begun to sprout. It’s now doing quite well in a hot spot high in the grow space. These trees go dormant when conditions are non-optimal, so I expect it will go lose its leaves again in winter.

One thing led to another, and I’m now the proud caretaker of a tiny Boswellia dioscoridis [photo on left] and a Boswellia neglecta, as well as a larger Commiphora wightii. [photo at bottom right, along with a Bursera fagaroides]. The Commiphora arrived just like the B carteri, as a dead-looking stick, and took forever to leaf out. However, it's now growing quite well. I’m on the lookout for an affordable Commiphora myrrha, the main species used to make resin and oil, but will have to be patient until one comes along.

These all belong to the general class of pachycaul trees, which are fat-trunked trees that store up water for hard times – perfect for my conditions. 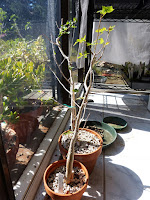 Pachycaul trees all seem to do OK in my hands, unlike the patchouli plant that I bought a couple of months ago, which turned out to be a disaster. The patchouli was nice and green when it arrived, but I quickly discovered that it goes through water even faster than a hydroponic basil plant. If not watered every day, it wilted. It also seems to want high humidity, which I simply can’t provide in the summer. I can’t deal with plants like that, so within a couple of weeks it had burned to a crisp despite my best efforts. No more patchouli for me. I will consider the poor patchouli plant a sacrifice to the gods of gardening to facilitate the growing of plants that can go for long periods of time without water like the little Boswellia trees.

I doubt that I’ll ever harvest resin from my frankincense or myrrh trees, but I just like having them around to remind me where the materials I use come from.