HAPPINESS IS HAVING A NEW WEEDEATER! 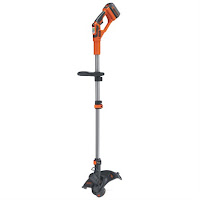 When you live on a quasi-farm as we do, noxious plant control takes on a certain importance and urgency. If you’ve ever read books by Tom Robbins, you may remember his seemingly over-the-top descriptions of blackberries in Seattle. The ugly truth is that everything he writes about blackberries is true. Within a year they can take over an entire one-acre lot and bury any buildings that are in their path. The blackberries are usually surrounded by various sorts of grass and weeds that block access to them, like lines of foot soldiers protecting tanks and heavy artillery. Because of Michael’s injured foot, this summer I am the sole defender of our property against these invaders. 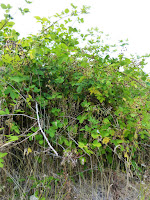 My usual strategy is to use a weedeater to cut down the grass and small blackberry starts to get at the mature ones. The adult blackberries often have trunks up to 5 cm in diameter and tangled canes many meters long. The most insidious thing of all is that in late summer the tips of the canes send out roots and form new plants wherever they touch the ground. This means that a single blackberry plant can spread in giant steps over an enormous area.

For the big blackberries, I have to use heavy-duty pruning clippers to cut them down and chop them up. Some people go to the gym to exercise, but I spend up to an hour a day cutting down invasive weeds and blackberries. I have a problem with weedeaters, which are mostly made for tall men. I can’t use one that’s longer than I am tall, so have been limited to a clunky battery-powered one with adjustable length called a “Grass Hog”, shown in the photo below right. This week the poor little Grass Hog died of exhaustion, overtaxed by the rigors of cutting heavy weeds and brush, so we had to go in search of a replacement. 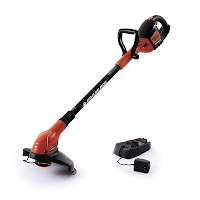 Apparently they don’t make Grass Hogs any more, nor do any of these devices go by the name of weedeater. I suppose it’s not politically correct to insult a tool by calling it a “hog”, or to imply that weed is being eaten, even though it’s perfectly legal to do so in Seattle. Maybe it’s no longer politically correct to call unwanted forms of vegetation “weeds”. I don’t know. In any case we found a battery-powered “string trimmer”, as they're now called, with adjustable length and a 40-volt rechargeable battery that lasts 2-3 times as long as two of the old Grass Hog's batteries used to do (the new one is in the lead photo for this post). The new battery charges up so quickly that I could go out and weed-eat three times a day if I had nothing else to do. It seems like a strange thing to be happy about, but there’s something perversely satisfying about killing non-native invasive plants, and especially blackberries. 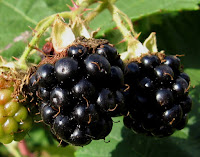 I have to bring perfume into the picture somehow, so will observe that the scent of whacked-down vegetation is very different throughout the year. In the late winter and early spring, the scent is moist and green, with the occasional pungent smell of a shredded tansy mugwort, the weirdly aromatic scent of Geranium robertianum, or the characteristic odor of fresh, juicy blackberry stems and leaves. We haven’t had a drop of rain since May, and the sky is filled with smog from wildfires, so this time of year the smell of cut vegetation is mostly dry and dusty, with the unpleasant odor of concentrated blackberry leaves and stems, accompanied by the occasional scent of a ripe blackberry. If we ever get any rain, I look forward to the scent of water hitting dry ground and pavement, but that may be a few months off given the typical weather patterns.

[Weedeater photos are from retail websites; blackberry photos are mine]
Posted by Ellen at 8:44 AM