THE SWEET SMELL OF LITHOPS 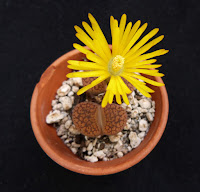 Until this year I had never really grown Lithops, those little plants native to South Africa that look like stones. All I’d ever had were the green hybrid kind that are sold in box stores or garden centers, usually bloated from overwatering and in their death throes. Earlier this year, inspired by the blog, My Life Among the Lithops, I stumbled upon a wonderful source for Lithops species, and now have a collection that occupies most of a nursery tray. 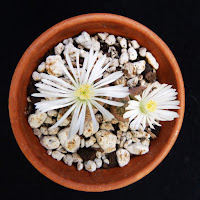 Never having had real Lithops before, I was in for several surprises and corrections of misconceptions about them. First, I assumed that they bloomed in spring. I’m not sure why I assumed this, except that some of the plants that I bought this spring had old flowers or seed pods attached to them. A couple of weeks after I got back from Ireland, I noticed that a few plants had little bumps sticking up between the leaves and thought they must be regenerating leaves out of season because the housesitter had watered them when he wasn’t supposed to. I watched in amazement as, day by day the bumps turned into what looked like flower buds.  Then I did the research that I should have done long ago and found out that they bloom in fall. Duh … they were just doing what they’re supposed to do. 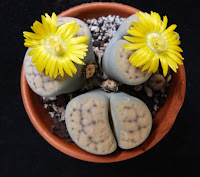 The other thing that I read was that the flowers open in the afternoon and close at night, and – sure enough – that’s what they do. It seems like a short window of opportunity for pollination, but I guess that’s the time when the natural pollinators are out and about.

The second big surprise came when I discovered that the flowers are fragrant. Wow! They have a lovely, sweet, powdery smell sort of like yellow mimosa. The fragrance was an unexpected bonus. Once again I’m learning that hybrid plants are not nearly as much fun to grow as species, every one of which is like a unique work of art. As far as I know, the hybrid lithops don’t bloom and, if they did, I suspect the flowers wouldn’t be fragrant. They’re just engineered to grow fast so that they can be divided and divided and divided forever – who cares if they bloom or not? They all look alike and just have to survive overwatering in a dark box store long enough to be sold as a curiosity so that they can go home with someone and die.

I have two box-store hybrids that have survived for several years. One of those hybrids has 10 growths, so I know it’s big enough to bloom. If they don’t bloom this year, inspired by heavy-duty lithops pheromones wafting from their ancestors, my suspicion about their inability to bloom will be confirmed.

Through all of this education and getting to know the species, I’ve developed a deep appreciation for these remarkable little plants.