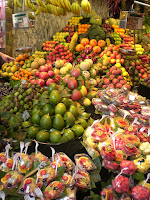 Being an orchid grower and a perfumer sometimes leads to strange experiences and gives me new names to describe what I smell in the greenhouse and the lab using crossover terminology from each area. I recently had the experience of encountering a familiar smell in an unexpected context. 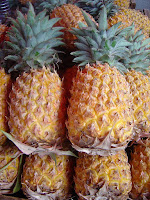 I think I’ll start the story on the perfumery end with a material called Fructalate, also known as raspberry dicarboxylate or diethyl cyclohexane-1,4-dicarboxylate. It’s a common aroma chemical, manufactured by a number of different companies. The official description is, “fruity, raspberry, apple, ethereal … a long-lasting fruity, berry note which is powerful, affordable, and stable”. To me it doesn’t smell like raspberries, but it certainly is long-lasting, powerful and “affordable”, which is a euphemism for cheap. 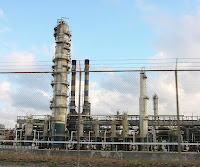 A couple of years ago I bought a few kilos of the stuff as a favor to an overseas colleague who couldn’t get it locally. I split it with a few others and kept a little for myself “just in case”. In the process of pouring it from the big container into smaller ones for shipping, a little bit spilled on the bare wooden table where I do this sort of work and where I pack plants to ship. For the first year the smell on the table was quite noticeable all the time. Even now it still hangs around, being especially strong if it’s very warm or if the table gets damp. “Stable” is an understatement.

Last weekend when I walked into the greenhouse, I could have sworn that I smelled fructalate. It was exactly that same smell of over-ripe tropical fruit combined with an organic chemistry lab or petroleum refinery. I thought I must be hallucinating, because there had never been any fructalate anywhere near the greenhouse. I dismissed it and went about my work, but I kept smelling it. It was the strangest thing. Just as I was leaving the greenhouse I noticed a plant blooming with a long, thick tail of tiny yellow-orange flowers. It was Bulbophyllum dixonii, also called Bulbophyllum morphologlorum, and when I smelled it – bingo! It was a dead-ringer for fructalate. It must manufacture a scent molecule that’s identical or very similar to fructalate, presumably to attract pollinators that like to eat or lay eggs in rotting fruit. The long spray of tiny flowers even looks like a cross between a pineapple and a lumpy banana.

It never ceases to amaze me that an orchid species and a man-made aroma chemical can share almost the same smell. Have you ever done a double-take smelling what you thought was a synthetic perfume note in nature?

[fruit and refinery photos from Wikimedia; flower photo is mine]
Posted by Ellen at 9:49 AM