ARE DEPARTMENT STORES (AND THEIR PERFUME COUNTERS) DEAD DINOSAURS? 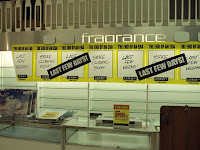 A couple of days ago I read in our local newspaper that the Seattle Macy’s is downsizing by selling off the top floors of the store. Moreover, they’re selling off entire stores elsewhere. Thinking about that bit of news, I realized that I was not surprised because it’s been years since I set foot in a traditional department store. I think the last time I was in one was in San Francisco when I went to Barney’s to visit someone I knew who worked in the perfume department. That was a nice downtown department store not a mall store, and I didn’t go anywhere except one counter in the perfume department,  so it was a pleasant experience. I can’t say as much for the typical US department store. 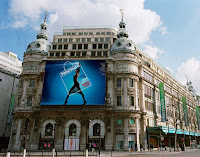 Urban department stores a century or more ago were built to be beautiful temples to the gods of consumerism, but somewhere along the line aesthetics and the human-friendly touch got left behind in the rush to achieve infinite growth of sales and profits. There’s something profoundly depressing about suburban shopping malls in general, and their cornerstone department stores are especially depressing. I have not been to a typical shopping mall for at least a decade except to visit the Apple store when my laptop needed repairs. The Apple stores in both locations I go to are outside, so there’s no need to enter the mall itself.

I suspect I’m not the only one who hates going to a mall or a big free-standing department store surrounded by acres of parking lots. It’s easier and less stressful to shop online if you’re looking for non-perishable things that don’t have to fit, it’s more fun to go to a small specialty shop in an urban area, and it’s almost always a successful and cheap exercise in opportunistic shopping to go foraging at one of the local second-hand stores.

The problem with department stores at all levels is that they have more or less generic merchandise, often cheaply made, at inflated prices. After all, they want to appeal to some mythical “average” consumer and they have high overhead. I think the same principle applies to their perfume counters – generic merchandise at full manufacturer’s suggested retail price.  Given online and specialty shop competition, I wonder how long the department store perfume counter will be a sustainable form of retailing.

To satisfy my curiosity, I’m going to ask how many of you readers regularly go to shopping malls and/or department stores? Do you enjoy going there? If so, what makes them appealing to you? If you do go to department stores, how likely are you to buy perfume there?

Because this post deals with the real and future prospect of ghost-town malls and big department stores and because Halloween is coming soon, when you leave a comment answering these questions you will be entered in a very special drawing for a hard-cover copy of Sheila Eggenberger’s book, Quantum Demonology, the story that was the inspiration for my Devil Scent series. Shipping is worldwide, with the drawing to be held on Halloween, October 31.

[I downloaded these photos a while back, but I think they were all from Wikimedia.]
Posted by Ellen at 9:01 AM