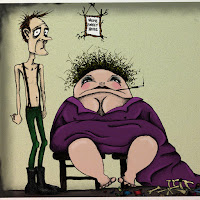 The claims made by some perfume companies and the journalists who write about them never cease to amaze me. Recently on one of the many Facebook perfume groups there was a link to this article entitled,“Could sniffing this perfume be the answer to being skinny?”,  claiming that a company that shall remain nameless here had released a perfume that can cause weight loss.

Not only are the claims over-the-top (“the first fragrance to boost your well-being”!), the journalist who writes about them seems to have no sense of logic. He or she writes, “A whiff of chocolate chip cookies baking in the oven can beckon even the fullest stomach to take a bite. Likewise, something rather foul can quickly turn off even the most prominent of hunger pangs. And now there’s a perfume that’s claiming to work in a similar way.”

Which way? Does the perfume smell so foul that it “turns off hunger pangs”? That would be the logical conclusion, but the article goes on to describe the perfume as “a blend of light, fruity and floral notes”. If so, then it’s no different from thousands of other perfumes dipped from the same vat, so what’s the point? 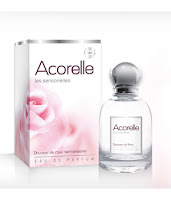 Reading on, apparently the point is that the perfume is supposed to alter your mood and make you feel “happy” (as other perfumes also claim), which will, in turn, lower stress, which will, in turn, cause you to eat less, assuming stress is what causes you to overeat in the first place. The problem here is that any pleasant odor that you like to smell, or any activity that you enjoy, will do the same thing, so the claims are not specific to the perfume in question, or even to perfume in general.

In the name of investigative reporting, the journalist appears to have consulted an aromatherapist who agrees that inhaling pleasant odors can affect mood, but who goes on to try to debunk the claims as follows: “they say it is the topical application that will affect mood … but absorbing through the skin would take up to 12 hours to travel through the body to finally reach the brain, so spraying this perfume would not be a way to get an instant mood shift”. Who said that perfume had to be “absorbed through the skin” to improve mood or that it would ever reach the brain via that route? I thought the whole point was smelling it regardless of where or how it was applied. Aromatherapists may not like to hear this, but it’s still aromatherapy even if it’s not straight essential oils sniffed from an organic, vegan diffuser. 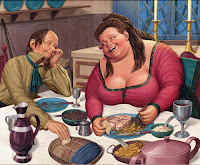 The aromatherapist and a nutritionist go on to bash perfumes that contain alcohol and imply that perfumes all contain “harmful chemicals”.

There is so much wrong with practically every statement in this article that I couldn’t begin to enumerate them all and will steer clear of commenting on the many misconceptions about biology. Unfortunately, this article epitomizes the overblown claims of perfume manufacturers (and those of many other industries), as well as the profound ignorance and/or lack of any real critical thinking on the part of those who write about them. As my father would say, if it weren’t so funny it would be tragic.

This concludes my rant for the day.

[Perfume bottle photos from retailers’ websites; Jack Sprat images from nursery-rhyme illustrations posted online. “Jack Sprat could eat no fat, his wife could eat no lean; and so between them both they licked the patter clean”, one point being that it takes all kinds to make the world go round and function as well as it apparently does for the two happy lovers in the last image.]
Posted by Ellen at 11:45 AM