I have a lot of sample mascaras, but will only report on the three that I’ve been testing for the past 6 months or so. One of them is as awesome as they come, and I can’t say enough good things about it. One is OK, and the other is a miserable mess. I’ll go from the good to the bad.

Buxom Lash Mascara (black).
This is the champ - probably the best mascara I’ve ever tried. It doesn’t clump at all, it colors each lash separately instead of making them stick together, it stays put all day until I remove it, and the little sample tube lasts and lasts. I have literally been using the small sample size several times a week for the past 6 months and it’s still going strong. The brush looks a little strange because it’s long, thin, and seems to be covered with tiny, slick plastic spikes instead of bristles, but it works like a charm. I love this mascara and would certainly buy a full size if I ever ran out of samples.

Lancome Hypnose Drama (black).
This works after a fashion, but I find that it is excessively goopy and tends to make my lashes stick together. It also tends to clump, but that can be mitigated if I frequently wipe the brush off with a tissue to remove excess buildup and recharge it with fresh mascara from the tube. The brush is a weird twisted shape that makes it hard to apply the mascara evenly, so there’s a definite learning curve if you want to use it. The mascara seems reasonably secure once it’s on, staying put until it’s removed. It’s OK, but I wouldn’t buy a full size because there are much cheaper ones that are as good or better. 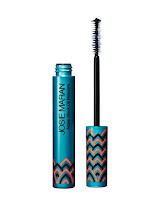 Josie Maran Argan Black Oil Mascara (black).
It seems that everything is wrong with this mascara. It’s extremely thick and would be goopy if it were not so dry. It has generated nothing but clumps and crumbs from day one. It even clumps on the brush. I gave it the benefit of the doubt and tried it several times, but obtained the same clumpy, ugly result every time. Even though it seems dry, once it's on, it tends to smear. The brush is weird, with bristles of all different lengths. It looks like it has a bad case of mange that's made its bristles come out in tufts here and there. The photo at the right doesn't show the half of it. The uneven brush makes it impossible to apply the stuff properly. I cannot even use my sample, let alone think about buying a full size. This one is a no-go and will be headed to the garbage.

[Photos from retailers’ websites]
Posted by Ellen at 9:01 AM