THE MAKING OF HAMSA 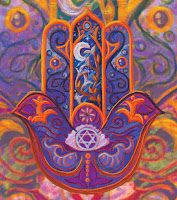 During my long blogging sabbatical I've gotten way behind on posting. I think I mentioned long ago that I wanted to use palo santo in a perfume, but never followed up. Here is the story of how I incorporated this rather difficult note in a way that actually works. After a couple of false starts, a project came along that turned out to be the perfect medium.

The hamsa is a stylized hand-shaped symbol with obscure origins in the Middle East. It serves as a sign of protection in both Islam and Judaism, and often has a stylized eye positioned in the center of the palm to deflect the evil eye. 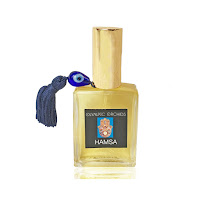 When Michelyn Camen contacted me to participate in the Çafleurebon multi-perfumer project “Scents of Protection”, I was excited by the opportunity to somehow render this symbol as a fragrance, but also a little intimidated by the challenge that it represented. Rather than thinking of the hamsa as an occult, magical amulet that works through mysterious external powers, I ended up considering it in the symbolic kabbalistic context of the ten sefirot. The sefirot represent the modes or attributes through which the divine power is manifested throughout the universe, and hence the modes or attributes that we, as humans hold within us and can call upon for the power, confidence, and goodness that will deflect evil and provide the strength to combat it. Ironically, these powers seem to be even more necessary now than they were when I started the project.

The sefirot can be thought of as abstract and concrete, intellectual and emotional, infinite and bounded, with one overarching concept that contains all the others and another that accumulates and channels their energy to create and interact with the world as we know it.

The Hamsa, with its five fingers, right and left, can be conceived of as a depiction of the sefirot. The two fingers of one side symbolize four virtual qualities, while the two fingers of the other side symbolize the related actual qualities. The center finger symbolizes the first and last sefirot, the origin and the realization of everything.  At least this is the scheme that worked when I set out to create a perfume. 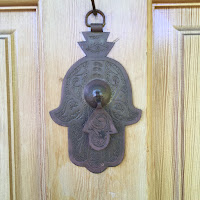 How to depict this in a perfume? It was not an easy task! I first considered making it all-natural, but in the end decided to include man-made materials to symbolize the interaction between nature and what we, as humans, have devised as protective measures both tangible and intangible, through superstition and science. I decided not to limit my materials to those that would have been traditionally used in ancient Israel, but to add a few international touches to celebrate the diaspora that has carried the symbolism of the hamsa throughout the world. 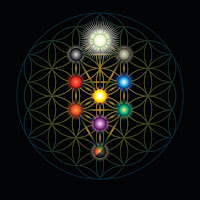 The first sefirah, the overarching idea, is symbolized as an invisible veil of olibanum smoke and the tenth, the unification and channel for worldly manifestation of everything else, as a solid block of sandalwood. The four pairs of contrasting properties are symbolized by contrasting pairs of materials. The first is palo santo and cognac, an ethereal woody incense paired with ceremonial wine to symbolize spiritual ideas, and the ritual celebration of those ideas; the second is mastic paired with liquidambar, bitter incense and honey-sweetness to symbolize strength and justice tempered with love and kindness; the third is myrrh paired with citron, earthy incense and an aromatic fruit of the earth to celebrate inspiration and the resulting human creations of beauty and utility; the fourth pair is oud and apricot, a resinous material produced by agarwood trees to protect them, paired with a fleshy, sweet fruit to stand for resistance to physical and emotional attack and the fruits of physical and intellectual bonding. The end result is a combination of the hard and the soft, the bitter and the sweet, tangible and the intangible.

The perfume is not intended so much as a “magic potion”, but rather as a reminder of the amazing powers that we have within us, powers that we can use to repel evil  from ourselves at the same time we use them to help other individuals and the world.

I decided to release Hamsa as a special edition in the traditional square spray bottle, decorated with a lampworked glass “evil eye” symbol on a detachable ring that can be used on a keychain, as a piece of jewelry, or just hung somewhere that seems right for it.

[All images except for the bottle and the hamsa on the door  (my photos) are from Wikimedia or educational sites online.]
Posted by Ellen at 9:38 AM