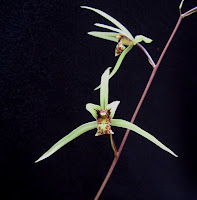 Cymbidium kanran is a cute little Japanese orchid, tiny for a cymbidium actually, with small pseudobulbs and arching grass-like leaves. The variety that I have produces small green flowers with dark red spots on the lip. I understand there are also red-flowered varieties, but I like the contrast on the green-flowered one. 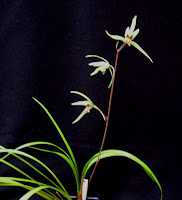 Kanran is an orchid that I’ve been wanting to see bloom for a long time, and it finally did it! The first plant that I had died - I’m not sure why. The one that I have now has grown well under exactly the same conditions as the one that passed away, so there’s no cultural pattern for success. It started blooming a couple of weeks ago, and I have to say that I was extremely disappointed that it didn’t have any fragrance. Yesterday, though, I smelled a light, citrusy, sweet, slightly musky scent coming from the flowers. The scent’s a little stronger today than it was yesterday. It’s apparently one of those orchids that takes a while to develop its scent after the flowers open. The scent still isn’t as strong as other fragrant cymbidiums that I’ve smelled, such as sinense, but it’s pleasant. Now I’m curious to see if the scent intensifies as the flowers continue blooming. I’ll update in a week or so.
Posted by Doc Elly at 10:25 AM