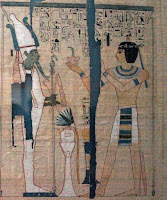 Last weekend I decided to kill two birds with one stone, experimenting with the formula I came up with for my own perfume version of kyphi and making a birthday present for a family member. I’ve been thinking about kyphi for a long time, collecting formulas from various places, trying to figure out which ingredients are common to all of the formulas and which are optional, and trying out various combinations. Even back in ancient Egyptian times, when kyphi was used as incense and medicinal salve, it seems there were as many different formulas as there were makers of kyphi, so what goes into it is, to some extent, a matter of taste.

The one thing that I was intent on from the outset was that this needed to be a 100% natural formula, using the best oils, resins and absolutes that I have. Since one potential application of the kyphi is in meditation and meditative movement, there would be no tweaking of the formula with anything that couldn’t have been in the original Egyptian version.

I started out with the basic resins - benzoin, labdanum, frankincense, myrrh, cedar, spikenard, and a few other things, then added a healthy dose of calamus root, also known as sweet flag. I wrote about calamus in an earlier post: calamus. Some people may not like the unusual smell of calamus, but I think it’s a key ingredient in kyphi, so I made sure that the formula contained enough calamus to be clearly noticeable. With the basic elements in place, it was time to add the embellishments - a whole array of spices along with some beeswax absolute and cognac absolute to take the place of the honey and wine used in the original incense formula. The final touch was some saffron absolute and a wonderful wild orange that gives the opening an almost gourmand quality.

That weekend, I seem to have not only killed the original two birds, but also a third one that I wasn’t aiming for. All day it had been raining and dark, and I was feeling depressed. Surely seasonal affective disorder can’t be setting in this early? In any case, after I’d put together a trial kyphi formula and smeared it on myself, I felt much more focused and cheerful - enough so to write a draft of this blog entry. Maybe the ancient Egyptians had the right idea.

Now, a week later, the mixture has blended. The calamus isn’t nearly as prominent and in-your-face as it was initially, although it’s still noticeable. The orange has practically disappeared, so I’ll probably increase it in the final formula. The whole composition is still spicy and resinous, but it has also taken on a slightly floral feeling even though there’s nothing floral in it. As an “authentic” curiosity, I would say that it’s a great success, and even as a natural perfume, it’s something that I can wear and enjoy. In fact, I used perfumer’s alcohol to rinse the last few drops of the original formula from the beaker I had used for mixing, and it looked and smelled so good that I put the alcohol in a little spray bottle and have been using it. It can’t be more than 5% perfume materials, but it’s still nice and strong, and it lasts a few hours on skin, much longer on clothing.

The perfumer side of me has an urge to try adding a little aldehyde C-12 to the mix to punch up the citrus aspect and give it some sparkle, but I’ll probably do that only as an experiment in a small batch that I keep to use myself. Everyone else, especially the birthday boy, can smell like an Egyptian.

I will be giving away one sample of this kyphi to the first person who comments and expresses interest in trying it. It will be your choice of a 2 ml concentrated perfume oil or 5 ml alcohol-based EdP spray.
Posted by Doc Elly at 3:19 PM