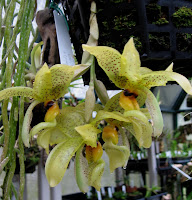 It was a big surprise to walk into the greenhouse a few weeks ago and discover a huge flower spike hanging down from the basket where Stanhopea wardii grows. This orchid has been a constant surprise to me. It was the first Stanhopea that I acquired. It arrived in the mail, and I took one look at the puny little seedling with black spots all over its leaves and knew in my heart that it was headed straight for the compost pile. But it didn’t go there. It didn’t even go to the orchid hospice, hospital, or recovery center, it slowly started putting on new pseudobulbs, getting bigger and bigger, growing reliably even though it has always been troubled from time to time by those unsightly black spots on the leaves. It’s now officially reached adulthood.

Stanhopeas are some of the most bizarre of all orchid flowers. They’re big and showy, like huge insects with a long proboscis, wings and huge eyes. They’re all extremely fragrant. The flowers pop open overnight, so one day there’s a cluster of big fat buds the size of apricots, and the next day the flowers are fully open. My wardii opened up two nights ago, and is in full bloom right now. My first impression was that it smelled like a peppermint patty, with distinct notes of peppermint, vanilla, and chocolate, but it’s a mint patty that’s been dabbed with some floral perfume, maybe a partly eaten patty that’s been sitting unwrapped in a woman’s purse next to some perfume sample strips.

I’ve seen the fragrance of Stanhopea wardii variously described as “vanilla”, “taffy candy”, “spicy” and “medicinal”, but it’s all of those things and more. I think the “medicinal” description is probably due to the mint scent. It’s definitely a gourmand fragrance, not an herbal medicinal one. However, I’ve also read that Stanhopea wardii is one of those “shape-shifter” orchids that emits one fragrance during the day and another at night. I've gone out and smelled it at different times during the night, but it seems the same - floral York peppermint patty.

One of these days I’ll make a Stanhopea perfume, but will have to decide which one. I’m not sure wardii is it, but the peppermint patty-taffy-floral combination could be interesting.
Posted by Doc Elly at 10:53 AM