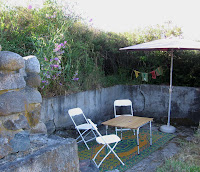 I have no idea what prompted this odd behavior, but for the past few weeks I’ve been taking a break from perfume. I’ve not been wearing perfume or dabbling in my “lab”. I’ve not been reading the perfume blogs or forums or ordering samples. I’ve neglected this blog. I think maybe the idea of all those samples in my closet finally became overwhelming. I’ve sampled enough perfumes so that I kind of know what to expect in many cases. As a result, what should be a pleasure easily becomes a chore. I think the proverbial straw that broke the camel’s back was a carded sample of Anna Sui Dolly Girl Ooh La Love that I pulled out at random to try as a form of self-discipline. I just couldn’t bring myself to do it, and it’s still sitting there taunting me with its garish card and the prospect of smelling yet another overpoweringly strong generic fruity-floral scent that’s almost identical to all of the other over-sillaged generic flanker fruity-floral commercial scents that are out there.

Today I knew it was time to snap out of my perfume slump, so decided to treat myself and try something unpredictable. A while back I got a few samples from Ayala Moriel, but had never gotten around to trying them. To my horror, I saw that one of them had either leaked or evaporated due to the cap not being put on tightly enough. It was Espionage. The smell on the stained label was enough to prompt me to add a drop of alcohol to the brown dregs at the bottom of the tiny jar and reconstitute the perfume. Ooh la love at first sniff! This is one good perfume. I may have created a super-concentrated version, but it doesn’t matter. Qualitatively, it’s the same.

Espionage starts out as a smoky, herbal, woody vanilla that reminds me of Lapsang Suchong tea. Gradually the smoke dissipates a little to reveal some subtle notes of dried rose petals and tobacco leaves, altogether enjoyable. The notes say that there’s “leather” in the mix, but given that this is an all-natural perfume I suppose the leather accord must have been formulated with cade or some such smoky material, providing a much nicer companion for the vanilla than a synthetic leather would have. There’s supposed to be ambrette in the composition, but it doesn’t hog front and center stage the way it does in Strange Invisible Perfumes. It just stays in the background, supporting and enhancing the other notes.

Maybe one reason why Espionage smells so good to me is because my nose is fresh and enthusiastic after its vacation. Whatever the reason, I’m back to perfuming again. Bring it on!
Posted by Doc Elly at 4:32 PM