ORCHIDS OF THE SOLSTICE 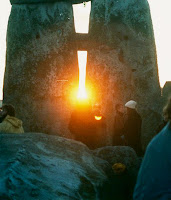 Oddly enough, the dead of winter is a time when a lot of orchids bloom. I walked into the greenhouse today to see splashes of color all around - a big blue vanda, one of the giants of the greenhouse, an Isabelia pulchella, a creeping miniature that suddenly broke out into a riot of small bright fuschia flowers, several ladyslippers, and Sophronitis cernua, a tiny plant with clusters of bright neon orange-red flowers. All of these orchids are colorful, but none of them are fragrant.

To compensate, though, there are some fragrant cattleya type orchids in bloom too. Laelia anceps is still in full flower, although the fragrance has changed from fruity-floral to more of a pollen-like scent. Brassavola nodosa, one of the parent species of Little Stars, is just coming into its night-fragrant glory. 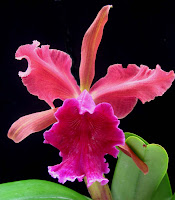 An odd one is Lc Luminosa, a primary hybrid between Laelia tenebrosa and Cattleya dowiana. It’s a frustrating plant to grow because the cross seems to have produced flowers that are too heavy for their stems. This year there were two growths with flower stalks. The first one to mature was a complete bust. The buds never fully opened because they dragged the stem down, bending it onto the stiff bud sheath, constricting and finally breaking it at that point. I supported the second flower stalk with a stake, and the flowers opened and were OK at first. Now they’re hanging down again from the point at which each flower joins the stalk. While they were in good shape, the flowers were fragrant, very much like the red cattleya described in another post - sweet, spicy, and fruity.

Another orchid that’s blooming now is the Brassolaeliocattleya (Blc) hybrid with a very long name that became the prototype for my perfume, Golden Cattleya, which I’m still working on tweaking, since I can’t decide what to do about the base. More on that next time. For now I'm just thankful that the days will start getting longer.

[Stonehenge image adapted from Wikimedia]
Posted by Doc Elly at 10:06 AM