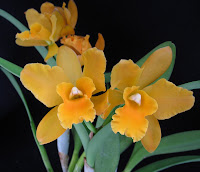 One of my favorite cattleya hybrids is a pound-puppy mutt called (Blc Wattana Gold x Blc Orange Nugget) x Blc Malworth ‘Orchidglade’. It’s a sturdy midsize plant with clusters of golden-orange flowers on short strong stems, held in a fan-like arrangement, well-separated from one another. It’s blooming now, one of the many orchids that suddenly bursts into flower during the winter solstice. It’s pretty enough, but what I really love about it is its fragrance. When the flowers first open, they’re like a civet bomb, spewing indole all over the place, accompanied by a sweet citrusy scent like orange fruit, orange flowers, and vanilla. After a week or so the indole recedes into the background and the orange fruit, orange flower, and vanilla combination takes over.

Of course I had to try to make a perfume based on the fragrance of the plant that I have nicknamed the “Golden Cattleya”. I’ve gone through several versions, the first one containing quite a bit of civet, the second one mostly the orange-vanilla combination, and the third one orange-vanilla with a strong sandalwood base. I know sandalwood isn’t part of the orchid scent, but it just seemed to go well with the orange and provides a long-lasting grown-up ending to the whole thing. I can’t decide which version I like best and lord knows I don’t sell enough perfume to go down the flanker route.

The civet composition I eliminated at first because it just seemed discordant. However, when I revisited it a few months later, after the materials had had time to blend, it’s actually very nice, although I think it could use some stronger fruity-vanilla notes. The second version is the one that is the least odd-smelling, sort of like an orange-vanilla dessert, but it’s fairly linear. That’s the one that I’ve distributed as samples. The sandalwood version was an attempt to boost the base, and I actually like it a lot, but then I’m a big fan of sandalwood in all of its real and synthetic permutations. It’s the least true to the flower, which I view as a down side. I'm still trying to make up my mind which direction to go.

If you’re interested in trying samples of all three versions of Golden Cattleya and commenting on the pros and cons of each, leave a comment to that effect. I’ll send samples to up to three people for their evaluation.
Posted by Doc Elly at 11:47 AM