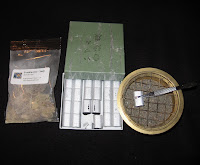 Ever since I can remember I’ve been around burning incense. My parents had some sort of charcoal cones or lumps that they burned occasionally, but I was never really involved with the process. Later on I had the usual Indian agarbatties or stick incense in all its different incarnations. Many years ago I discovered Japanese incense while visiting a bamboo nursery that we just happened to drive past and stopped to check out. My all-time favorite is called Seiun Chrysanthemum Light and is made by Nippon Kodo. It’s a “smokeless” incense, all charcoal with no bamboo stick in the center. It’s not really smokeless, but it does smoke less than the standard kind. It has a lovely woody-patchouli fragrance that seduced me as soon as I sniffed it years ago in the bamboo place. I also have their Mainichi-Ko Sandalwood, which smells more or less like Indian nag champa incense, and Shin Mainichi-Ko, which is labeled “patchouli” on the package, but doesn’t smell like patchouli. The website describes it as “green tea”, so maybe that explains why it’s very subtle. Now that I’ve found their online store, I may try a few more kinds. 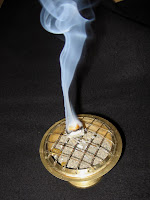 Recently I decided to branch out into what I suppose could be called “primitive” or “minimal” incense, burning pure resins and woods on a little charcoal tablet over a bed of sand. I reasoned that this way I’ll get to experience all sorts of incense ingredients in their pure form. A few days ago I received a pack of bamboo charcoal tablets in a cute little Japanese box. Each tablet is covered with silver paint, which was a surprise. I also got some aloeswood, myrrh, opoponax, and one type of frankincense that I didn’t have. I already have quite a collection of woods, resins and other materials that I keep on hand for tincturing, so I might as well try burning some of them. 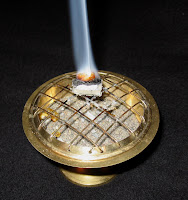 Tonight was the perfect night for the first experiment. It’s cold and dark outside, it just started snowing, the wind is blowing, and the ground is starting to get white. I carefully broke off one of the charcoal tablets, held it in a pair of forceps and lit both ends on a candle. It caught fire right away and started glowing perfectly. On went a chunk of Nadji frankincense (Boswellia sacra), and - oh my goodness! It immediately went up in the sweetest, most delicious smoke imaginable. The effect was beyond words. This is the way to burn incense!

The charcoal itself doesn’t smoke, but the frankincense resin smokes like an erupting volcano. Maybe I should use smaller chunks. But who cares when you can be indoors, in the warmth and the light, and surrounded by clouds of burning frankincense?
Posted by Doc Elly at 8:36 PM