I have several items ready for posting on the blog, since I always work on multiple entries in parallel. Now that I’ve recovered from a particularly nasty bout of flu, I was trying to decide which one to use, and was a little dismayed to find that every one of them was complaining about something. Not wanting to start the new year on a completely negative note, I decided to start from scratch, inspired by a perfume that I’m sampling today that isn’t all that remarkable in and of itself, but contains a note that I’m fond of even though I haven’t used it much in my own compositions. 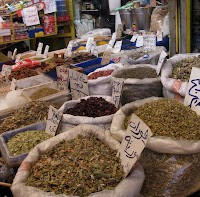 I recently got a sample of Aesop Marrakech, an all-natural EdT made by an Australian company. I guess it’s supposed to represent a Morrocan spice market. It starts out strong, herbal, and slightly spicy with notes of anise, cumin, coriander, cardamon and cloves. The anise note quickly fades away, leaving the sturdier, woodier spices along with a slightly floral-soapy note and a hint of patchouli. The initial impression is dry and transparent, like standing near a homemade soap and potpourri stand at an outdoor craft fair, the kind that sells rough-cut soap with lots of little shreds of unidentifiable plant debris embedded in it. After an hour there’s not much left except patchouli. The patchouli floats around as an all-pervasive sillage, evoking memories of a perfume my mother had when I was a child.

My mother’s perfume came in a plain square bottle with a simple label that said Oriental. I’m pretty sure it doesn’t exist any more. It was patchouli with a subtle floral and woody accompaniment, it was magic in a bottle, and I absolutely loved it. I would sneak into the top shelf of the bathroom cabinet where she kept it and put it on. She and everyone else in the house must have known, because you can’t miss patchouli if it’s anywhere within 500 meters, but no one ever said anything. My other prominent memory of patchouli is that of a German colleague who always doused himself in patchouli, so you could smell him if he was anywhere in the building or approaching the building. I don’t have particularly fond memories of the person, but I did enjoy his perfume as long as it was at a sufficient distance. 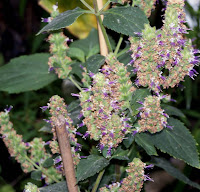 So what is this patchouli stuff? The essential oil is distilled from the leaves of a plant in the mint family, Pogostemon cablin that grows in India and elsewhere. It looks a little like the lemon balm that I grow in my garden. Because it’s a small green plant, it’s a quickly renewable resource, and that’s an exceedingly good thing in this world of overconsumption and exploitation of resources. Patchouli has such a characteristic smell that it’s hard to describe in any other terms. It’s a class of its own like “citrus” or “floral” or “vanilla”. It was abused so much back in the 1960s and 1970s that it is forever doomed to carry the stigma of being a “hippie” or “headshop” scent.

I have yet to make a perfume in which patchouli is prominent, although I have used it to sharpen and round out other notes, always keeping it below the threshold at which it pops out as unmistakably patchouli. One of these days I may try to recreate my mother’s patchouli, or at least the version of it that is permanently imprinted on my olfactory memory.