TURMERIC IN FOOD AND PERFUME 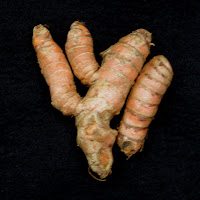 I’ve always been familiar with dried turmeric, the bright yellow powder that gives curry its color, but when I went to our local Indian store the other day, there was a big bin of fresh turmeric roots. They’re orangish tan in color, a little like ginger roots but rounder, with pronounced segmentation lines. They look for all the world like some sort of insect larvae. If you’ve ever seen mealworms, turmeric roots look like giant, fat, stubby mealworms that are budding new babies off of the main body. A whole bin of turmeric roots is a little disconcerting at first glance because of the insect larvae association. Cut open, the fresh root looks very much like a carrot, and tastes like mild ginger with some extra bitterness and aromatic floral notes. Actually, it’s delicious to eat raw.

The turmeric species used in cooking is Curcuma longa, a plant in the ginger family. One of the materials in my perfume organ is turmeric essential oil, which smells pretty much like dried, powdered turmeric. I have used it in making an Indian-themed perfume, which is still in the developmental stage. I don’t think the turmeric is identifiable individually in the mix since there are so many other notes, but it certainly contributes a spicy bitterness to the overall effect. 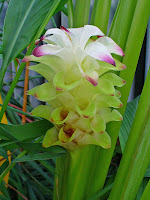 Curcuma aromatica is another species closely related to culinary turmeric. The plant looks similar, but the flowers are bright pink in the photos that I’ve seen. The essential oil made from its rhizomes is simply called “curcuma”, and is lighter and more aromatic than turmeric. It has a special fragrance all its own and works wonderfully as a bright, rather transparent base note. I used it in Northwest Rainforest and Javanica to provide an undercurrent that was airy and diffusive, but completely natural-smelling. Curcuma has become one of my staple materials, while turmeric is reserved for special effects.

Now that I’ve discovered fresh turmeric, I’m going to start slicing or grating it and using it in food, both raw and cooked.

[Curcuma longa flower photo from Wikimedia]
Posted by Doc Elly at 9:48 AM