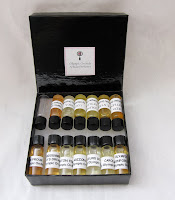 A big part of every artist’s education is observing and analyzing the art of others. Just as musicians listen to a lot of music, perfumers smell a lot of perfumes. In both cases, the pool of creations available to experience is almost inexhaustible. I have an uncountable number of perfume samples, some of which I like a lot better than others, but I learn something from every one that I test.

Today I don’t want to talk about the perfumes themselves, but about the presentation of the samples. I’m in the process of reorganizing my samples in a beautifully efficient filing system, but problems arise when samples are oddly packaged. I’ve become something of a connoisseur of samples, so have come to appreciate well-presented ones. Here are some of the types of samples I have had to deal with along with their pros and cons, in no particular order: 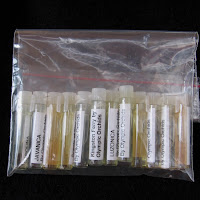 Pop-top vials. These are the most common, and generally a good option. Decanted samples and a lot of manufacturer’s samples come in the 1-ml size, and quite a few carded samples come in larger sizes, 1.5 ml or 2 ml. It doesn’t matter to me whether they have a wand or not, as long as the stopper is secure enough to prevent leaking, but still fairly easy to remove and reinsert repeatedly. Some vials have stoppers that are near-impossible to remove; I have broken a couple of the poorly designed Bond sample vials trying to get the rigid stopper out. Vials with tiny, pinched-in necks always seem to have flimsy stoppers that are not only hard to remove, but tend to split when trying to stick them back in. These aren’t very common except among individuals who swap samples.

Microscopically small samples. It doesn’t matter what sort of container these come in, it always irks me that someone thinks their (or someone else’s) perfume is so extraordinarily valuable that they can’t part with at least 1 ml of it. A 1 ml vial that’s only one-fourth or one-half full but sold at the usual sample price (or more!) is not the way to win happy customers. I won’t knowingly buy these any more.

Unlabeled containers. I am always annoyed when I receive unlabeled sample vials attached to a card with the name printed on it, especially if the card is large and unwieldy. I don’t mind it quite as much if the sample vial comes in a little plastic baggie with the name written on it, but it’s still not ideal. One thing I want to avoid is having a lot of unknown samples sitting around. How hard is it to print or even hand-write a label and stick it on the vial? 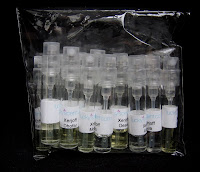 Spray vials. Many of the carded samples come in spray vials, as do some of the larger decanted samples. I’m probably in the minority, but I prefer to dab perfume rather than spray it. Sprayers, especially the small, cheap ones, are not always predictable or reliable. The DIY ones in which the sprayer screws or is crammed onto the vial often leak, so almost always arrive with a piece of electrical tape wrapped around the area where the sprayer joins the vial. All too often the tape is not enough to prevent leakage. Even if it does, the adhesive eventually makes a sticky mess, so I’ve learned to remove it as soon as the package arrives. The manufacturers’ vials that come on carded samples don’t leak, but the spray mechanism sometimes dribbles instead of spraying, and sometimes it doesn’t work at all. 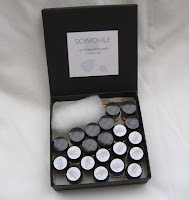 Squatty mini-tubs. These seem to be used only by the “natural perfume” people, I’m not sure why. I’ve only had one of them leak in transit, but they’re a pain to store, and they won’t fit in my file system. I don’t like them.

Non-samples. Don’t even talk to me about peel-back papers, wax plates, wet towels, or anything that’s not actual perfume. These are not samples, they’re insults.

Screw-top vials. I haven’t seen many of these, but they do exist. I’ve received a few samples in screw-top vials, and like them a lot. I found some really nice 2-ml vials (really more like mini bottles) that I use for the larger samples of my perfumes. I haven’t seen any evidence of them leaking, they can be easily opened and closed, and they’re easy to store along with conventional sample vials. Best of all, they don’t make my protectively calloused thumb go numb from pressing stoppers into vials.

Odd-shaped containers. Occasionally samples will come in extra tall and thin vials, vials with rounded bottoms, or some other awkward configuration. These are generally hard to deal with.

What kinds of sample packaging do you like? What do you dislike? Leave a comment and you’ll be entered in a drawing to receive a sample of Guerlain Vetiver in a 2 ml screw-top vial. Why Guerlain Vetiver? Just because I have a large bottle of it that was sent to me as a gift. It’s more than I can ever use, so I'd like to share it.

The winners of the Guerlain Vetiver samples are Ines and JoanElaine. I will try to contact each of you regarding shipping.
Posted by Doc Elly at 12:45 PM