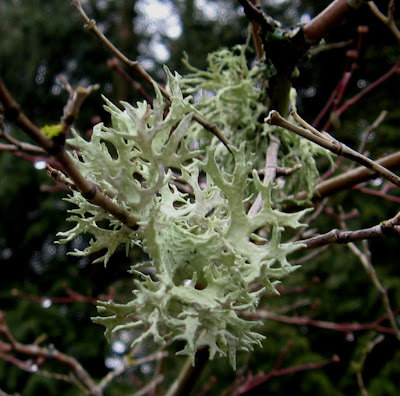 Despite its ubiquity in traditional European perfumes, most notably chypres, oakmoss is one of those materials that I haven’t worked with a lot, and don’t really have a good feel for. I have used it in a couple of compositions, but it was certainly not in the forefront, added more as an afterthought to round out the fragrance than as a key element in the base. 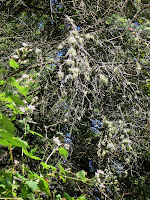 To try to remedy this situation, I have been wearing a dilution of pure oakmoss absolute. No, it hasn’t killed me yet or caused my skin to break out in some horrible disfiguring rash. In fact, despite its sinister dark color, it seems quite benign and well-behaved. It has a quiet but distinctive fragrance that’s hard to describe in terms other than “oakmoss”. To my nose, it is dominated by earthy and sweet notes, almost like raisins and dried plums and good sherry, accompanied by some woodsy notes reminiscent of dried leaves and old branches and maple syrup, and there is a subtle vaguely flowery note floating above it all. It’s quiet and lovely, staying close to the skin so that I’m compelled to keep sniffing the spot where I applied it. It is a base note, after all.

Inspired by something I had read, I tried mixing a little Iso E Super with oakmoss. The resulting scent was brighter, more diffusive, less sweet and fruity, and more woody. Unfortunately, the mixture had the same unpleasant note that I find in sherry, especially cheap sherry tasted after eating something doughy, a note that makes it practically undrinkable for me. After about half an hour, that note became less prominent, leaving a nice, warm, woody scent in the sillage, but the same bad sherry note close up. If I used that combination there would definitely have to be some strong top notes to cover up the initial strange smell. Probably not a good idea. 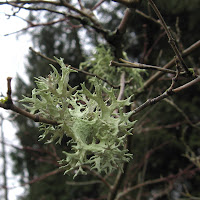 Oakmoss absolute is made from a lichen, Evernia prunastri, that grows on the branches of oaks and other trees in temperate forests. A closely related lichen, Evernia furfuracea, grows on evergreen trees and is commonly referred to as pine moss or cedar moss. These types of lichens, along with others, grow all over trees in the Pacific Northwest, and I recently discovered that the young Japanese maple that’s right outside our front door has sprouted some luxuriant clumps of oakmoss. In fact, I'm so proud of my oakmoss crop that those clumps are featured in the top photograph, and the one on the left. How cool is that, having real oakmoss growing within a few steps of my front door? The living lichen doesn’t have a lot of odor, mostly just a wet and woodsy scent, but there is just a hint of the sweet and fruity oakmoss absolute fragrance if I crush it in my fingers. 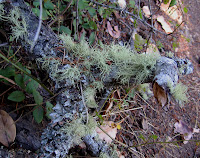 Because oakmoss (and cedar moss and pine moss) contain a putative allergen, atranol (or chloratranol), they are one of the materials that that has been all but banned in Europe by big brother IFRA, resulting in mass reformulation of perfumes, reformulations that I suspect were used as an excuse by commercial manufacturers to go to much cheaper formulas than the original ones, substituting lots of things besides IFRA-blacklisted materials.

I like the smell of oakmoss, but so far it has not been a material that I consider essential to the perfumes that I make. I need to make a classic chypre one of these days, just so I can use lots of oakmoss.
Posted by Doc Elly at 9:00 PM