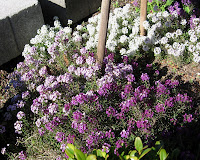 A while back I gave Alyssum several samples to test. These were the three key components of her perfume (smoke, cedar, and sweet alyssum flowers) plus one possible supplemental note (ambroxan). She’s been wearing them and making notes. Here’s the log that she kept.
------------------ 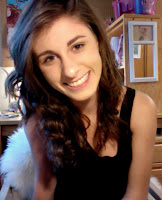 As a brief note, I’d just like to make it clear that while I was experimenting with the scents, I was careful not to put on any other scented products (moisturizer, etc.) to keep the scents pure. I placed an ample amount on my left wrist and never rubbed it, knowing that scents fade faster if I were to do so.

2/18 - Smoke
• At 10:20, I put a whole “wand’s” worth (wiped the dropper entirely on my wrist)
• The scent was pungent at first (bitter, almost) and very strong (I could smell it through my clothes.
• After ½ an hour, the smell became much more gentle, warm. More like incense. I really like how it meshes with my skin.
• At 12:30 the smell has faded to how I always remember my house smelling mid-winter with the wood-burning stove blazing. The “wood” notes of the wood-smoke scent are now more pronounced.
• Scent lasted, albeit faded, until that evening.
• The next day, the cuff of the sleeve on my jacket still smelled very strongly of the smoke scent.

2/20 – Cedar
• At 2pm, put a whole wand on my left wrist.
• At first it smelled very sharp, not even like wood, but within even five minutes it softens, like very fragrant wood chips.
• At 3:20 the scent was much more wood-like, and softer than woodchips. This is the perfect scent, especially when combined with the smoke (I think).
• I realize that cedar is a very dry smell, which is why I think it will blend best with the smoke, but without the alyssum, the two would be too much. Perhaps the alyssum is softer, flowery and “moist” enough to balance them out.
• By the end of the day, the cedar was a perfect, subtle, woody fragrance.

2/21 – Ambroxan
• Put on at 12pm
• Sweeter than the other two, not as musky as I imagined, but perhaps a good middle tone between the smoky wood and the alyssum.
• There’s something very natural about the scent, almost animal. Smells more like someone’s skin than, say, the cedar.
• By the end of the day, the scent was even lighter, sweet, feminine. The essence of that “lingering perfume” smell.

2/23- Alyssum
• Put on at 12:15
• Interesting because those sharp, pungent-yet-sweet (like cut grass) notes that usually follow the light and airy top notes of an alyssum flower are dominant at first.
• At 2pm, the scent smelled sweet, light, and clean. I have another perfume called “Warm Cotton” from the Clean line, and their bottom notes are very similar. A little worried that this lovely aspect will be overtaken by the grittiness of the smoke.
• At 11pm a sweet, light feminine scent remains.

2/23 – Smoke + Alyssum
• Two parts alyssum, one part smoke.
• Because I put the smoke on second, it immediately dominated over the alyssum scent.
• Twenty minutes later, the alyssum softens the pungent smoke so that it smells like sweet incense.
• Surprisingly maintains that “clean” smell thoughout the day.
• Before bed, I can hardly smell the smoke at all. The alyssum has totally won out over the initial heavy smoke scents.

------------------
This all seems promising, especially the part about the alyssum winning out over the smoke. The main thing I was worried about was the possibility that the smoke would completely overpower the alyssum.

It sounds like the next step will be to work on adjusting relative concentrations of the base components to make a cedar-smoke base, possibly with a tinge of ambroxan. Alyssum is quite right that it could provide a link from the wood smoke base to the floral heart. From Alyssum’s report, I think the strategy will be to go easy on the cedar, using just enough to color the smoke, without the woody notes ever becoming really apparent.

It also sounds like we’ll need to add some light and airy top notes to the alyssum, so that’s the next accord that I’ll be making up. I’ll need to go smell the neighbor’s alyssum flowers again soon, after the current unseasonal bout of snow and cold is finished and the poor plants are back in bloom again.

Full speed ahead!
Posted by Doc Elly at 4:10 PM