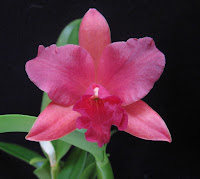 Sorry folks, fruity-floral scents are not a scourge of the early 21st century, they were developed back in prehistoric times by orchids. A few days ago I brought in an orange-red hybrid cattleya orchid that was starting to bloom in the greenhouse, and set it on the kitchen counter. It’s called Blc Dennis Kone x Wanda’s Fire, for those who care about nomenclature. Yesterday afternoon, I was walking into the kitchen and smelled a strong fruity fragrance, like apricots. I dismissed it as coming from the bowl of fruit that was sitting out on the counter, even though it had no apricots in it. Later on when I was watering the plant, I realized that the fragrance was coming from the flowers! This orchid is a fruity floral par excellence, more fruity than floral. It puffs out its scent all day, perfuming the house with what could easily pass for the next celebrity perfume.

Speaking of orchid fragrances, I have a couple of perfumes (not my own) that are reputed to smell like cattleya orchids. I’ll post reviews on here since both of them do actually have a cattleya orchid-like note. 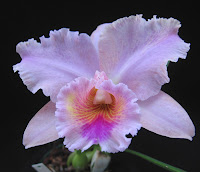 Dior Hypnotic Poison Eau Sensuelle
I normally avoid flankers just because I don’t like the concept. If you’re going to make a new perfume, just make a new one. If you’re going to reformulate the old one, just reformulate. You can’t please all of the people all of the time, so why try? However, because I grow orchids, Abigail sent me a sample of HP Eau Sensuelle to try, and I appreciate the opportunity to test something that would not otherwise be at the top of my testing queue. HPES starts out with an odd toasted-vanilla fortune cookie scent, aquatic notes, and some lovely florals. I’m happy to report that the floral notes could conceivably include a cattleya orchid accord, since they share the slightly spicy, fruity, moist, mixed-flower-flavored-with-vanilla vibe that’s in the fragrance of cattleya hybrid orchids. 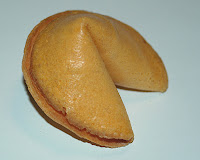 However, as an orchid grower, I have to say that “orchid” is a safe description to use for just about any perfume note, since in life, as in perfumery, it can mean just about anything given that orchid scents are all over the olfactory map. Orchids or not, HPES is a sweet, floral-gourmand scent. After the opening, which does actually remind me a little of orchid flowers, the scent changes for a while into plastic flowers and fortune cookie along with a little patchouli, then finally to a slightly powdery base that’s mostly sweet, lightly caramelized vanilla. I have to say that I like this fragrance, although I’m not sure I’d want to wear it very often. 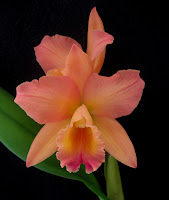 Shiseido Message from Orchids
A while back I was fortunate to find a sample of this limited-edition scent created by Shiseido in 1996 (or 2000, depending on whose information you believe) for the Japanese Grand Prix orchid show, to represent the fragrance of the “orange cattleya orchid”. It is a peachy floral that really does manage to capture the scent of a cattleya orchid. It has that gentle, full, moist, fruity, slightly spicy feeling characteristic of a big “corsage-type” orchid in mid-bloom, especially in the top notes. After an hour it dries down to a lightly floral skin scent with some warm musk in it, and by 4-6 hours, it’s pretty much gone. Since I grow orchids, I was interested to sample this, and pleased to find that it does smell something like a hybrid cattleya flower. I’m not sure it’s anything that I’d ever wear except out of curiosity, but it’s a nice floral perfume.

I will be out of town until Sunday, visiting my mother, so there will probably be another hiatus in blog posting.

[Fortune cookie photo from Wikimedia]
Posted by Doc Elly at 9:26 AM