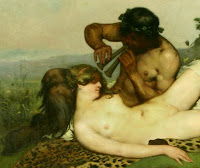 I just got back in town last night and the first thing I found was a message from my mystery client. Finally! As time goes on, he seems to be revealing more and more of his true identity, so it won’t be long until he shows one of his many faces full-on. However, for the moment, the webcam shows him occupied with some sort of seduction-like activity, blowing music out one pipe and perfume out the other, maybe conducting a test of what he’s selected so far. I think he’s trying to tranquilize her (his assistant?) and make her feel better. Here’s what he writes:
------------------------------------

I heard you thought I'd forgotten about our little project. Not so. I've just been busy, she's been frantic - and sick, lately - and the rest of the world has been busy going to Hell in a handcart, as the saying goes.

Man, those samples were...something else. Sometimes, I forget what it is I love so much about Planet Earth - the sheer, utter diversity of it all, the tastes and tones and scents of it, down to and including frankincense and labdanum and cistus. She and I had a fun evening playing around with them. I've caught her in the act on a few occasions, sticking her nose - a short, straight, Northern European nose - in that box and inhaling, just for the pleasure of it. I've caught her on other occasions before she leaves in the morning, dabbing on a little labdanum. It always puts a smile on her face. She thinks I don't notice, but I do.

I read some of the comments you got from my email. I thought it was funny, that one comment said it was kind of creepy to use a scent to seduce. As if you humans haven't been doing it for thousands of years, turning it into an art form, men and women alike, using scents in all their permutations to entice and beckon closer. If that's not the general, overriding idea, why bother?

I said we have a bass line with that combo, and do you know, I think we do. It's just...the percussion is a little too sharp. We need to dampen it a little, mix it slightly back, bring those incredible frankincenses a little more forward. I'm not worried about the labdanum. That stuff is almost radioactive. Add just a drop or two of something slightly softer and woodier, maybe - perhaps one of those wood extracts you told her about, a smidgen or two of cedar, and something just a little - I do mean a little - sweet. I may be the Devil, but I'm not the biggest monster on Earth. We both know who that is.

You're on a roll, and you've done a great job so far. I'm looking forward to the next stage of the process. And come on - I'll bet you are, too!

Sounds like my next step is going to be to combine all of the materials selected by this odd team to produce a first draft of the over-percussive bass, and send that along with samples of some woody and sweetish materials. The giant arborvitae might be just the solution. It’s sweet, woody, fruity, and truly unique. I’ll also include some musks - cosmone, galaxolide, helvetolide, and such, just in case, and a couple of cedary things including nootka tree oil and the cedar accord that I made for Alyssum. I think I’ll also include choya loban in case they want a smoky note. Vanilla? I don’t think so, but a touch of it might provide the sweetness they’re looking for. Just in case, I'm going to mix up a special vanilla accord. I need a good, thick, sensual-smelling one anyway.

I can tell that the mystery client and his assistant are starting to think about heart and top notes. What can we add that would go with the base and not make a gigantic mess? It seems to me that the melody line may be in the bass, so the rest would be ornamentation, but we shall see. In any case, the whole base/heart/top convention is artificial, so we don’t really have to work that way.

What they’re right about is that I’m looking forward to the next stage of the process!
Posted by Doc Elly at 11:05 AM