WEARING PERFUME, ABSTAINING FROM ELECTRONIC DEVICES, AND THE JOYS OF RETURNING HOME 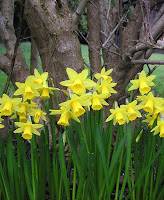 We just got back from nearly a week on the road in Oregon, a mix of the city and the wilderness, the upscale and the downscale. I won’t bore you with a travelogue, but suffice it to say that the first two nights we stayed at nice hotels, and the rest of the nights we camped in our car in various parks that ranged from the mountain rainforest to the coastal sand dunes.

When I was packing, one important consideration was what, if any, perfumes to take with me. I decided on four - Frederic Malle’s Musc Ravageur, which both my husband (M) and I love; Teo Cabanel’s Alahine, which I love; a very old mini bottle of L’Occitane Vanille Bourbon, which he loves; and a bottle of my own A Midsummer Day’s Dream, which was more or less untested in a real-life wearing situation. In the rush to leave, I forgot my camera. 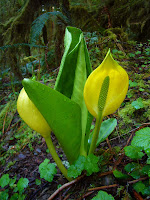 The first night, in Portland, we went out to hear live music, and I wore A Midsummer Day’s Dream. It was a little strange to actually be wearing a perfume, not just testing it, and it gave me a little more perspective on how “normal” people use and perceive perfumes. M liked it a lot, and I have to say I did, too. It had a lot more sillage than I thought it would, and it lasted much longer than I expected. I liked it so much that I applied it again the next morning, and it lasted through a wonderful dinner at the Oregon Gardens, a sort of botanical garden, nature preserve, and conference center where we got to see 400-year-old oak trees covered from top to bottom in oak moss, and surrounded by daffodils! If I make an Oregon-inspired perfume it will be based on oakmoss and daffodils, since the whole state is full of them. It’s also full of skunk cabbage. I’ve never seen so many skunk cabbage plants, with entire low-lying fields bright yellow with their flowers.

The next day I put on some L’Occitane vanilla and we headed for the mountains. Interestingly, M usually raves about how good it smells, but this time he didn’t. I think he’s getting jaded when it comes to perfume, since he has to smell so many different things when I’m sampling. We spent the day on trails in the rainforest and soaked in a rock pool fed by a hot spring that poured out of a steaming cave in the side of the mountain. Then it started to rain. We found a state park area, folded the back seats down, and slept very comfortably in the car, with the rain and occasional hail pattering on the roof. That was the way we “camped” for the rest of the trip. The down side was that my little carry-on suitcase with “non-essential” items got jammed between the car seats under some other stuff, in an inaccessible position for the rest of the trip, leaving me without any perfume. I survived. My nose is probably all the better for having had a vacation.

The other deprivation that I suffered was not having my laptop, but I have to say that I really didn’t miss it. On the third day the battery of my phone ran down, so I didn’t have a phone, either. Technology-free, I survived to enjoy the dunes and the trip up the rocky coast on highway 101, with alternating waves of rain, hail, and sunshine. It was gorgeous. 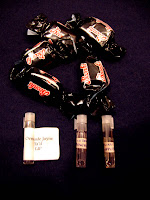 When I got home, there was a package from Croatia waiting for me. Oh, the thrill! I do so love getting packages in the mail! Ines had sent me a packet containing three perfume samples - Hilde Solani Conaffetto, Serge Lutens Boxeuses, and Ormonde Jayne Ta’if, none of which I have tried. To top it off, there was a packet of Croatian sweets called Bronhi. I’ll be sampling all of these gustatory and olfactory treats over the next few days and reporting on them.

It’s good to be back home!

[Because I forgot my camera, the flower photos are adapted from Wikimedia]
Posted by Doc Elly at 10:50 PM