GARDENING BY THE MOON 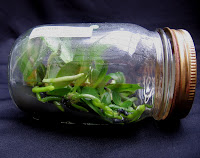 When I raise baby orchids, they start out growing in a sterile environment, in a glass “flask” with nutrient agar. The seedlings stay in the flask for at least a year, until they’re mature enough to withstand the rigors of a real world in which only a tiny fraction of newly-germinated plants would ever survive. Even with the early years spent in a sterile bubble, there’s often some attrition of the weakest plants when I take them out of the flask. I usually deflask multiple batches of plants at once, and over the years have noticed that some batches fare much better than others for no apparent reason. 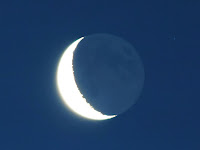 Recently, I’ve deflasked several batches in the dead of winter, but noted the phase of the moon at which deflasking occurred. It may be pure superstition, but the batches that were deflasked during the waxing moon phase have grown noticeably better than the batches deflasked during the waning moon phase. I’m sure that this couldn’t have been a “self-fulfilling prophecy” phenomenon in which I treated one batch better than the other, expecting a better outcome, because I had no idea which moon phase would be better. According to the farmers’ lore, the waning moon is the right time for tasks that “reduce” or require root growth, and the waxing moon is the time for tasks that “increase” or require above-ground growth. Deflasking could go either way. It reduces the number of plants growing together and requires establishment of roots, but it also requires an increase in vegetative growth.

Apparently the vegetative growth hypothesis wins out, at least that’s how it looks so far. Obviously I need more data before coming to a conclusion, but maybe the old farmers were right. Now I wonder if there’s a moon phase that’s optimal for perfume-making.
Posted by Doc Elly at 9:54 AM