THE INCREDIBLE HULK ORCHID (AND ITS MICRO-MINI COUSIN) 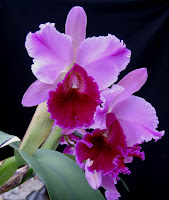 For several years now I’ve been harboring an orchidaceous monster in the making. It’s a standard cattleya plant called Lc Betty Ford ‘York’, and it’s presently occupying almost the entire large table in my solarium. It started out as a tiny seedling, grew at a reasonable rate in the solarium for a couple of years, and bloomed once, as modestly as a cattleya can bloom. Last year it put on a huge spurt of vegetative growth, but didn’t bloom. It finally became so large and unwieldy that I had to move it out to the greenhouse, where it thrived even more. This winter it decided that it would bloom off of the last 3 growths that it had added, with 3 or 4 flowers per growth - enormous flowers, each as big as my outstretched hand.

The flowers are so large and heavy that the usual bamboo stakes won’t hold them up, so they’re supported by tall objects on the table that serve as crutches. The colors on the flowers are gorgeous, especially with the sun shining on them, or through them, lighting them up like a magenta neon sign. The lip is the deepest, darkest, most velvety purple-maroon imaginable, set off by a network of gold stripes in the throat. 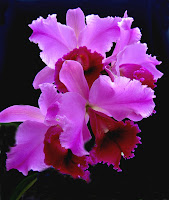 But it’s the fragrance that is the main attraction. As cattleya fragrances usually do, it started off indolic, skanky and a little camphorous, but over the past week has gone through a candied rose phase that reminded me of L’Artisan Timbuktu, only to end up today as what I consider the quintessential “orchid” fragrance. It’s juicy, fruity, floral, musky, spicy, and the most sensuous, sweet, watery fragrance you ever smelled. It fills the entire house in the morning. If I were a pollinator, I’d dive right in, drink it, and wallow in it until I was completely intoxicated.

Hybrid cattleyas seem to have largely escaped the movement to de-scent flowers, so most of the naturally unwieldy, standard-size ones have a beautiful fragrance. The mini-cattleyas, on the other hand, have been bred for windowsill size plants with relatively large flowers, and are mostly not fragrant. 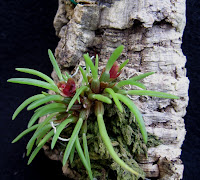 The big surprise in the greenhouse this week was the blooming of Maxillaria minuta, a micro-mini orchid that I grew from infancy. The whole plant is no larger than the lip of one of the cattleya flowers, and the flowers are smaller than a lentil. They’re pretty, though - nicely shaped and dark red with a shiny, wet-looking lip. I haven’t detected any fragrance yet, but am hoping that one will develop over the next few days.

One of the things that I find so fascinating about orchids is their mind-boggling diversity. It couldn’t be much better illustrated than by the giant cattleya and the miniature maxillaria.
Posted by Doc Elly at 11:49 AM