DEVIL SCENTS ROUND ONE

I’m slowly reading through the second half of Quantum Demonology, Tarleisio’s book that started the whole Devil Scent Project, trying to dole it out in small amounts to make it last longer. Meanwhile, I’m busily at work formulating perfumes for the two main supernatural protagonists – Devil Scent pour homme (Dev for short) and Devil Scent pour femme (Lil for short).

There are clues scattered everywhere throughout the book as to what these two perfumes should smell like, especially Dev’s, but actually getting there is another matter entirely. I’m afraid I’m overthinking this project, because I’m not happy with either of the formulas I’ve come up with so far. In fact, I just disposed of my first draft of Dev. It’s the first time I’ve ever done this, since I usually like to keep things for future reference, or to use in something else. It was too animalic, and not in a good way. The problem is that both perfumes need to be larger than life, supernaturally intense and emotionally and intellectually riveting, and I’m still trying to figure out the best way to accomplish that. 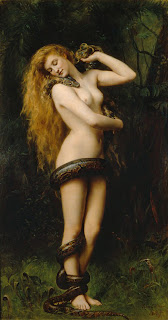 As you might have guessed from a previous post, one of my ideas was to use davana in both formulas to represent the shape-shifting, projection-reflecting, highly personal nature of each character’s manifestation to the human world – like the famous snake (Dev) that’s seen with the beautiful woman (Lil) in the picture. Well, it didn’t work as I had hoped it would. The davana seemed to have the odd effect of attenuating everything else instead of enhancing it. I still think using davana is doable, it’s just a matter of getting the right balance and the right effect. I don’t want to evoke any images of snakes, since those are much too retro.

I’m much happier with Lil right now than I am with Dev. At least I haven’t thrown hers away. I wanted to make a scent with a lingering, sharp, almost transparent, woody-musky base, which I’ve done to a first approximation using a combination of ambrocenide, cashmeran, cosmone, and patchouli, along with some other complementary woody-musky stuff. I then added paradisamide for its weird, greenish, passionfruit-like notes, a mix of sharp florals dominated by lily-of-the-valley, rose geranium, and a greenish rose, and then topped it all off with my leather accord, the davana and some ruh kewda. I want to use kewda in Lil’s perfume just because it has such a sharp, earthy, otherworldly, in-your-face character. It’s one of the notes that’s “almost poisonous”. I may add a little galbanum to top it all off, but will have to hold off on that and see how it blends while I go off on my trip to San Diego this weekend, back home on Wednesday night. Lil has possibilities.

For Dev, I’ve decided that in contrast to Lil’s sharpness, his will be natural-smelling, rounded and smooth, dominated by a blend of three different versions of labdanum, the scent mentioned most often by our heroine. I want a strong, sensuous labdanum to pop out as the main theme, the one that lasts from beginning to end. I’ll embellish it with tolu balsam, a church-type incense accord, a few other resinous and woody notes (I haven’t decided how far to go in the oud-ish direction that I initially took), something subtly musky, a good dollop of leather, davana, a tiny bit of motia attar, and cinnamon leaf. I haven’t decided whether to include the “birch” (presumably birch tar, not the root beer kind) and immortelle that were mentioned at one point in the narrative. I might make a second, alternate, version that’s smoky, super-leathery, and sort of sweet. I’m thinking now that I may make a new, more mellow “old, black leather jacket” accord to use in Dev’s formula(s).

I hope I get a chance to mix up at least a preliminary beta-version of Dev before I leave so that it can sit and blend while I’m away, but given all the other things I have to take care of in the next 2 days, I’m not overly optimistic that I’ll get it done.

In any case, now that I’ve kicked off this partial self-disclosure of what I’m working on, I look forward to reading about other perfumers’ devilish plans.