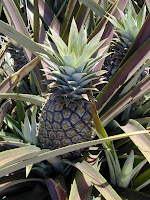 In the Pacific Northwest we sometimes get a weather phenomenon called a “Pineapple Express”. It happens when a big current of warm, tropical air blows over the Pacific from Hawaii, and it causes a lot of rain. It usually happens in the winter, during the rainy season, so I suppose it’s actually one cause of the rainy season rather than an effect. The past couple of days we’ve had the unheard-of occurrence of a pineapple express during what should be the start of the summer dry season. Yesterday I read that there was flooding in one of the local shopping malls because the roof couldn’t handle that much rain all at one time. 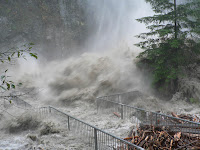 When I went out for a run yesterday morning, the air was humid and tropical, with all kinds of wet, green scents that I normally don’t smell in late June. The most striking one was a powerful smell of privet flowers. I don’t know where it was coming from, but it was unmistakable.  Overnight, a bunch of new bamboo shoots have emerged to go with the big new canes that are already growing. I’m afraid the warm, wet weather is going to stimulate the black bamboo even more than it already has been, sending it into a full-on manic phase of uncontrolled growth. I wonder if climate change is going to turn Seattle into Hawaii? The orchids would probably enjoy it.

Yesterday I filtered the first small trial production batch of Blackbird EdP, and was a little surprised at how dark it is. I did use real blackberry fruit products, but didn’t realize how intense a color they would produce even in dilution. The other strongly colored material that I used is fir balsam absolute, which is dark green. Together they produce a juice that is near-black, at least in the Boston round storage bottle, about the color of a Cabernet Sauvignon, but more transparent. I hope it will be lighter colored in the thin spray bottle, but I also modified the formula to make a “Backbird light” (literally light), thinking that most people are probably scared of dark-colored perfumes. Fortunately the dark juice doesn’t color or stain my skin, but I worry about light-colored fabrics. I don’t want to ruin anyone’s expensive, white, designer shirt.

I’m happy to say that the light version smells pretty much like the dark one, at least in the concentrate, which is still quite dark. I haven’t seen the light version in dilution yet, so don’t know how much of an improvement it will be, but I’ve still got almost two weeks to decide which one to go with. I suppose that if Serge Lutens can do purple perfume, I can do burgundy, and it would be in keeping with the Blackbird theme, but I may cautiously settle for dark pink.

[photos from Wikimedia. The flooding river photo shows one of our local streams during a pineapple express]
Posted by Doc Elly at 10:00 AM