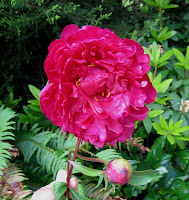 The ebb and flow of academic life creates its own seasonal pattern, much like the seasonal patterns in nature, primitive cultures, and farming communities. Last week was the final week of classes and the official beginning of professors’ three months of summer unemployment. The financially lucky ones take on a temporary job funded by a federal agency through their grant(s) and spend a luxurious three months concentrating on their research. Others dig into their meager savings account to pay the mortgage and buy groceries, hoping that the summer doesn’t bring any major house or car repairs or other expensive disasters. The pre-tenure people and the post-tenure masochists continue working their butts off as usual, without pay, while the hedonists take the summer “off” to regroup and write.

In any case, having a 9-month salary and benefits is infinitely preferable to being one of the increasing crowd of poorly paid and horribly exploited part-time faculty who are in the precarious position of being hired by the semester or quarter to teach undergraduates, often at multiple institutions. 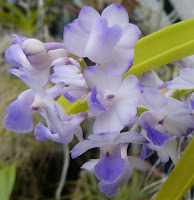 When I started writing this post, I intended it to be a joyous ode to the beginning of summer, but maybe I was influenced by the fact that the weather today is cold and cloudy rather then the beautiful warm sunshine we’ve had for the past week or so. In any case, Thursday evening after teaching my last class of the year and attending the last faculty meeting, I collapsed and slept for a full 12 hours. When I woke up, I suddenly felt restored to a near-normal state, and ready to launch into my summer activities, sort of a mini death-and-rebirth experience.

The onset of summer has brought all kinds of little gardening treats. The tuberoses that I planted last year have come up again, stronger than before, so there’s hope for them. We ate the first artichokes from the garden yesterday. They were tender and delicious, better than anything I’ve had from the store.  Cherries and strawberries are getting ripe. The outdoor garden orchids are all in full bloom, as are the peonies and roses. Yesterday I bought a star jasmine plant in full bloom, and will be adding it to the garden as soon as I decide where to put it. 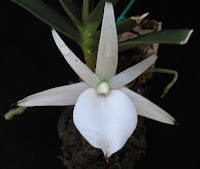 In the greenhouse, there are distinct olfactory contrasts. Angraecum didieri is blooming with its powerful, gorgeous, tropical white flower nocturnal fragrance, and Rhynchostylis coelestis is emitting its lilac-like daytime fragrance for a 24-hour perfume fest. The Rhynchostylis is one of those orchids that has bluish-colored flowers, something fairly unusual among orchids. 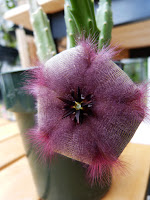 As a counterpoint to the lovely floral perfumes from the orchids, I’ve had a Stapelia hirsuta blooming for the past week or so. A Stapelia is a type of South African succulent plant that looks vaguely like a spineless cactus. When the bud first appeared, I was amazed at its size, and was even more amazed when it started to open, revealing a zebra-striped flower covered with long, maroon-colored hairs. Then the flower started to emit its fragrance. It smells exactly like rotten meat, obviously to attract flies to pollinate it. I think the scent lure was effective because there were some big flies expressing an interest in it. Who knows – maybe it will produce a fruit and seeds to go into my collection of other seed-grown baby cacti and other succulents.