THE EMANCIPATION OF JASPER AND THE MAKING OF A FELINE PERFUMISTA 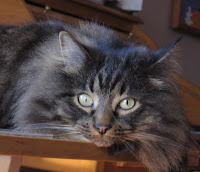 Just when we had made up our minds not to have another cat, Jasper appeared on our doorstep and in our lives. It wasn’t as if he just showed up out of the blue, as his predecessor had done, walking calmly out of the woods one day after living on his own for an indefinite period of time. Michael actually found him intentionally. After Rosy died, we started seeing critters in our yard. Most bothersome were the opossums and rabbits that came at night to eat the veggies from our garden. Michael found out about a cat whose owner was moving to California, and couldn’t take him with her. We discussed the need for a “guard cat” to keep the wild animals at a distance, and agreed that it would probably be a good idea. He went to interview Jasper, and they hit it off.

Jasper Rasputin Kathan arrived at our house in December in one of those plastic pet carriers. The first thing to come out was his huge head, followed by an equally huge body. I have no idea how he ever managed to squeeze into the carrier. He proceeded to frantically rub against every object in the room as if he needed to take charge and immediately wipe out all olfactory traces of his predecessor. He never seemed to question the fact that he was coming to live with us. He said goodbye to his previous owner, and that was it. After the marking frenzy, his next order of business was to eat a huge quantity of food.

Up until the time Jasper came to our wilderness-farm, he apparently had led a sheltered life, mostly in the house with short excursions into a city back yard. I think he was intimidated by the vastness of his new kingdom. It was two weeks before he would venture upstairs, and only now, after nearly 6 months has he started venturing into the woods unaccompanied. 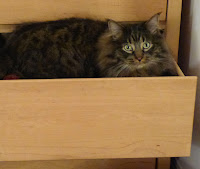 Jasper has long, dense fur, with an impressive mane. The collar he wore when he arrived obviously bothered him, because he kept scratching at it, trying to remove it. After a week he was comfortable enough with me to let me take it off. This was the ritual of the emancipation of Jasper. At that point he became a free farm cat. Within that first week he also learned to use the cat door so that he could come and go as he pleased. At first he spent most of his outdoor time on the back deck, but has gradually expanded his horizons to encompass at least half of the property, maybe more. One of his favorite activities is running full tilt and jumping out of the woods at us when we’re outside. We haven’t seen a critter in the yard since he’s been here. He may have no hunting skills, and a “mew” that sounds like a newborn kitten, but a 20-pound Maine Coon cat looks scary enough to make anything from a shrew to a raccoon run the opposite direction. 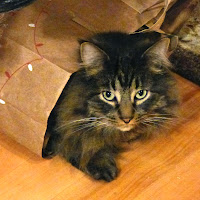 What has surprised me most about Jasper is his apparent love of perfume. Whenever I’m working in my studio he comes and hangs out, as if he wants to help me. When I’m testing materials, he comes and sniffs them, his nose quivering at a million miles a minute. When I’ve filled my big black transport bag with fragrant packages to mail, he comes and lies down on the bag, or next to the bag. If I put perfume on my wrist, he always checks it out. He shows an inordinate, obsessive amount of interest in materials that I’m tincturing, and I’ve had to double-bag and hide some tinctures to keep him away from them.

The most surprising evidence that Jasper has become a hard-core perfumista happened last night. I put a tiny dab of pure, high-quality oud on my wrist as a special treat after a long, hard day. Within less than a minute Jasper came running as fast as he could. He sniffed and sniffed at my wrist, obviously in olfactory heaven, and then started licking the oud oil off! I had no idea that oud would appeal to a cat. I think I should appoint Jasper as my official oud tester!

If you have a cat, does it pay any attention to perfume? If so what is its reaction?
Posted by Doc Elly at 9:12 AM