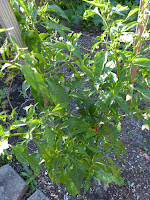 This year we’re growing a type of small peppers called pimientos de Padron. They are popular in Spain, where they’re fried in olive oil and seasoned with coarse sea salt, making a truly delicious dish that’s often served as tapas. They’re usually used while they’re still green, but if left to their own devices they eventually turn red and dry out. The thing that’s truly special about Padron peppers is that one or two out of every twenty are hot, and the rest range from mild to sweet. Eating these peppers is like playing a gambling game – will you win the lottery and get the hot treat? 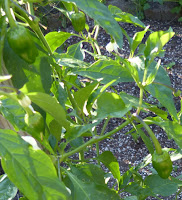 The ones we’re growing in the garden seem to be a super hot variety, especially when they’re ripe and red. In fact, the dried-out red one that I ate neat off the vine was probably the hottest pepper I’ve ever tasted, and I’ve tasted some blisteringly hot ones in India and Mexico. Actually I only ate half of it at the first sitting, and I have a higher tolerance for hot stuff than just about anyone I know.  The plant is now making a new crop of small green peppers. I think they’re just about ready to fry! 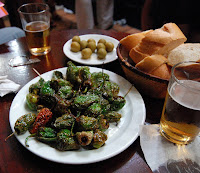 So what do Padron peppers have to do with posting on my blog? If you’ve been reading for any length of time you may have discovered that most of my posts are sweet and innocuous perfume reviews, discussions about making and marketing perfume, photos of my garden and orchids, or musings about wearing perfume. However, about one or two out of every twenty posts are rants about something cultural, social, political, philosophical, environmental, etc, and I sense that some people are turned off by social commentary, just as other people are unable to tolerate the taste of capsaicin-filled chili peppers. When you tune in to my blog you’re gambling that you’ll get whatever payoff it is you’re looking for, the sweet and palatable or the hot and spicy. 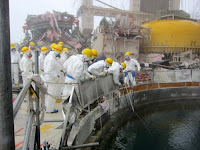 Today’s rant is on the egregious lies that big industry and government are able to get away with, and the fact that so many people accept them at face value until presented with overwhelming evidence to the contrary. The prompt for this was an article that I stumbled upon a week or two ago in the more obscure “Asian” section of our local online newspaper, in which it was revealed that Tokyo Electric Power Company (aka TEPCO) had been saying that everything was fine and dandy in their Fukushima facility, denying that the tsunami disaster had created any ongoing problems even though about 300 metric tons of highly radioactive water have been leaking into the Pacific Ocean every day for the past two years since the meltdown happened. Obviously the folks at TEPCO and the Japanese government, which was bailing them out, knew this, because it turns out they were experimenting with various methods to try to contain the contaminated water.

According to the articles I’ve read (here's one) the ongoing leaks occurred through or around a barrier that TEPCO had attempted to build in the soil around the damaged reactors. The latest news is that the water has not only been leaking through the barrier, but has now spilled over the top of the barrier and is flowing directly into the Pacific unimpeded. Now they’re talking about a plan to run cooling pipes in the ground and freeze the soil. What if the power goes off again and everything thaws? In any case, don’t they still have the problem of the water accumulating and the question of what to do with it? You don’t have to be an engineer or physicist to know that if tons of contaminated water are being generated every day, it makes very little sense to try to contain it or store it, because it would need an ever-larger container. And what would they do with it all, anyway? Some of the isotopes are rapidly-decaying, but the half-life of cesium 137 is 30 years, and that of cesium 135 is over 2 million years. That’s a long time to keep the ground frozen.

The situation itself is bad enough, but the most disturbing aspect of the whole incident is the lack of any sort of public criticism of TEPCO’s failure to acknowledge the problem for two years. Everyone apparently prefers to keep their head in the sand, praise TEPCO for “trying”, as if they were a klutzy kindergarten student, and not look for actual solutions to the problems.

TEPCO’s failure to disclose and seek solutions for its radioactive waste problem probably just represents the tip of the iceberg. How many other large, wealthy industries and governments engage in similar deceptive practices to hide their own egregious mistakes or intentional wrongdoing, while individuals are harassed and fined for trivial issues like a homeowner letting the vegetation grow too high in their yard or children operating a lemonade stand without a city license?

I suppose the tactic employed by big corporations is to keep most people so occupied with bread and circuses that they don’t have time to think about the fact that the ocean is full of all sorts of waste that is slowly or quickly killing marine life and getting into their own food. When you have to work two or three minimum-wage jobs just to pay the rent and eat, it’s probably hard to do more at the end of the day than sit down in front of a stupid TV show, drink a cheap beer, and fall asleep. However, even the more affluent and educated people of the world seem remarkably apathetic and passive when it comes to protesting blatant corporate deception. At least I can write about it and grow Padron peppers to eat with my radioactive salmon.