WHAT’S IN A LAVENDER? 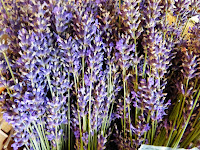 It probably seems like I’ve been writing a lot about lavender this summer, but it’s because I live in a part of the world that’s a hotbed of lavender cultivation activity. Recently, I’ve been receiving an education about lavender distillation, growing and evaluation from Mesha Munyan, who is one of the established local growers.

I guess it’s not surprising that we grow good lavender, because the climate here in the Pacific Northwest is similar to that of Provence, especially in our back yard and in certain microclimates on the Olympic Peninsula around the town of Sequim. In fact, Sequim has been the venue for several International Lavender Conferences.

Last Sunday Mesha got together with Michael, Victoria Jent (of EauMG) and me, to talk about the process of lavender judging and demonstrate the various properties that are considered desirable (or not) in lavender. There are a number of species of Lavandula, and a seemingly infinite number of hybrids, varieties, and named cultivars.

Naming of lavender is confusing, to say the least, with multiple synonyms for every species, hybrid, and variety.  Ones that is commonly seen for sale in garden centers is L angustifolia (top right photo, also called L vera, L officinalis, English lavender, common lavender, true lavender, etc.). It’s the typical narrow-leaved variety with tall spikes of small flowers, and is the main one used in perfumery. In all species, most of the oil is not in the flower petals or leaves, but in the calyces, which are the the bulbous structures beneath each flower, where the seed are produced. 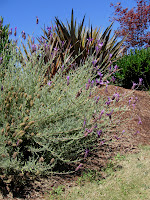 Another common species is L stoechas (at left, also called French lavender, Spanish lavender, butterfly lavender, etc.). It blooms early in spring, with fat spikes that have a few large flower petals sticking out. L dentata (photo below, right) looks similar to L angustifolia, except that the leaf edges are toothed instead of smooth, and the leaves are a little wider. Just to confuse things, this species is also called French lavender or fringed lavender. And there are others. L latifolia is also called Portuguese lavender or spike lavender, but there’s also a L spica that seems to be an old-fashioned name for something else, but it’s not quite clear what. The list goes on. Within each species there seem to be a practically infinite number of varieties and named cultivars.

Different species and varieties of lavender can be crossed to produce all sorts of hybrids, so of course the question is, “which ones yield the best oil for perfumery”? To start to answer this question, we sniffed samples of oil from angustifolia, stoechas, and the catch-all hybrid term “lavandin”, also known as “lavender grosso”, which is commonly used to designate oil from inter-species hybrids of all sorts, often those between angustifolia and latifolia. I think that’s right, although after a while all of the nomenclature becomes a blur.

Oils from L stoechas and lavandin have a strong camphorous component that makes them easily identifiable and poorly suited for perfumery, unless one specifically wants a camphorous scent. Lavandin also seems to have a distinct “cat pee” smell that makes it useful only for highly specialized purposes. 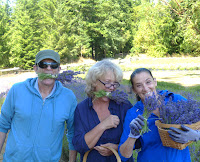 Once we got to angustifolia, the real fun started. Every variety of this species has a distinctive scent, and that scent also varies depending on the distillation and aging process. Going through all of the different lavenders was like a wine-tasting, with descriptors that are every bit as complex as those used to describe wine. Some smelled like the typical linalool-rich, coumarinic-floral lavender that we’re most used to, but others had unexpected nuances like the one with a note that smelled almost exactly like freshly cut, moderately ripe pears. Others had notes that were metallic, reminiscent of other fruits, green leaves, hay, mulled wine, and various types of flowers. International judges have checklists with a long list of descriptors, both good and bad.

Lavender is much more complicated than most people realize. Every time I learn something new about it, it becomes more apparent that there’s far more to it than the catch-all name “lavender” would suggest.

[Photo of lavandula dentata from Wikimedia because the one in my garden (labeled "French lavender"!) isn't blooming right now. The two clowns with the lavender bundles in their teeth are David Falsberg of Phoenicia Perfumes and Mesha Munyan]
Posted by Doc Elly at 2:03 PM